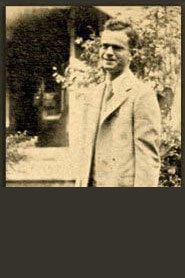 George S. Keller (1911-2002) founded the Keller & Keller law firm in 1936. During his 50-year career as a trial lawyer, George made incredible contributions to the legal profession, most notably advancing landmark cases and challenging the status quo on behalf of his clients.

In addition to George's accomplishments and contributions in the area of personal injury law, he was also a family man who placed a tremendous amount of value on ethics and integrity, all of which is illustrated in his memoir titled a "View From the Top."

George began his legal education at the University of Michigan Law School. After successfully completing his first year of law school he was confronted with a dilemma: finish his law education at the University of Michigan, or leave the school to be closer to his new bride. His decision to move to be closer to his wife, and ultimately move to Niles, Michigan, would be one that changed the course of his life.

As he settled into his new town he began clerking for a local attorney. When he wasn't learning on the job, he was hitching daily rides ten miles south of Niles to complete his education at Notre Dame Law School, while still finding time to be on the Notre Dame Law Review.

After graduating from law school, George soon opened his own law firm where he began to develop a personal style that saw him confront legal matters with a high level of enthusiasm, commitment and success.

Throughout the 40's and 50's, George handled a broad range of case types with a focus on what was at that time an "emerging" area of law: personal injury. His interest in personal injury was ignited when he saw that other attorneys didn't appear to be challenging existing laws and traditional notions on behalf of their clients. In short, he believed he could do a better job and make a difference in the lives of the underdog.

One example of George's commitment to his clients occurred in the late 40's, when he successfully worked with local leaders and factory workers to form a new independent labor union to better protect the rights of workers, despite resistance from factory management and powerful national unions.

By the end of the 1950's George Keller had built a national reputation as a skilled trial lawyer. And he would gain further notoriety for his representation of a couple whose son was killed after being struck by a car while walking beside a road. Despite a long standing law that tried to greatly limit the amount of compensation his clients would receive, George never gave up on the lawsuit and pushed the case (Wycko vs Gnodtke) all the way to the Michigan Supreme Court where he would ultimately win.

It was Wycko vs Gnodtke that spurred national change toward helping loved ones not only pursue, but also be adequately compensated in a wrongful death lawsuit. It would also eventually alter the law of wrongful damages in more than 75% of the states in our country.

It was George's belief that clients come first every time, no exceptions.

Today, Keller & Keller has grown into a multi-state personal injury law firm that also handles a variety of lawsuits nationwide. And no matter how big or small your case, whether you speak with an attorney, a paralegal, or an intake specialist, we approach our work with an unwavering commitment to the belief that clients come first every time, no exceptions. When you call us to talk about your case, we believe you'll agree.