Many people probably have a similar picture of an aggressive driver. It’s that guy who cut you off with an unfriendly gesture in his rearview mirror or that woman who tailgated you until you moved aside and then honked in anger as she passed. You might even picture an incident of outright road rage where a driver gets so angry at another driver that he shouts obscenities or even pulls out a weapon. While these scary incidents do happen every day, they are not the only behaviors that are considered to be aggressive driving. According to the National Highway Traffic Safety Administration (NHTSA), aggressive driving occurs when "an individual commits a combination of moving traffic offenses so as to endanger other persons or property." By this definition, we may all be guilty of driving aggressively from time to time.

Actions That Are Considered Aggressive 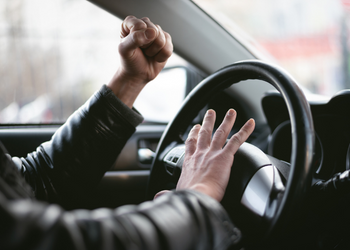 According to a AAA Foundation for Traffic Safety report, over half of all traffic fatalities are caused by some form of aggressive driving. The most common aggressive driving behavior is speeding. While you may not think that breaking the speed limit means you are driving with aggression, experts disagree. Speeding is a factor in one-third of all fatal crashes. Speeding clearly endangers other persons and is therefore considered aggressive. Other actions that fall into this category include the following:

The key to remember is that a driver does not have to feel anger or aggression in order to drive aggressively and endanger others.

Lack of  Driving Awareness Adds to the Dangerous Driving Conditions

The AAA study on aggressive driving found that a majority of survey respondents believe that aggressive driving is a serious or extremely serious traffic safety problem, yet admit to committing aggressive driving actions, such as exceeding the speed limit by more than 15 mph, accelerating to beat a traffic light, or pressuring other drivers to speed up. It is this disconnect between common driver actions and the danger they cause that contributes to the problem of aggressive driving. Drivers must make safer driving decisions in order to reduce the rates of traffic fatalities.

Even experienced drivers with clean records need an occasional reminder of safe driving habits. Crashes can happen without warning, but by making sure you are not breaking traffic laws and are focused on driving, you can protect yourself and others on the road. Remember to always do the following:

by James R. Keller [email protected]
Connect with me
Partner at Keller & Keller
1 Comments
Great blog very interesting to read this thanks for sharing this information
by Hammad April 30, 2019 at 06:48 AM
Post a Comment