Two Lawsuits Spark Controversy Over the ART Project in Albuquerque 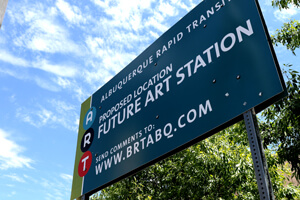 Albuquerque residents have been hearing about the Albuquerque Rapid Transit (ART) project for months. It is no secret that the infrastructure of a city—public transportation, roadways, cultural trails and parks—play a huge role in the sustainability of that city. The new rapid transit system will be installed on Central Avenue in the heart of the city with the goals of creating more reliable transit services for the city of Albuquerque, enhancing the quality of life, and creating economic opportunities.

The plans for the project began discussion as early as 2011, but with funding finally in place, construction is set to begin later this month and won’t be completed for more than a year. Once the construction is completed, the city feels certain that residents and tourists will be pleased with the outcome. The City of Albuquerque highlights three main benefits: (1) more reliable transit with seven minute frequency during rush hour, improvements in travel time, and connection of activity centers in the busiest part of the city (2) enhanced quality of life by providing safer pedestrian walkways, trees and landscape, and slower traffic (3) economic opportunities with improved land value, increased tax revenue, and new job potential.

However, the $119 million dollar project has sparked a lot of controversy and there have already been two lawsuits filed by local business owners and residents.

The first lawsuit brought by Albuquerque citizens and business owners asks that the project be put on hold. The complaint claims that the project will not only be a public nuisance because of construction and traffic but would fundamentally change the character of the of historic Route 66 “from the pavement to the iconic scenery.” Furthermore, the project will directly or indirectly affect over 150 Places on the National Historic Registry.

The second lawsuit is a federal one from businesses also trying to halt the project. This lawsuit questions the design of the project stating that Central is far too narrow to accommodate the design. The complaint outlines how each design element will affect the landscape.

The Mayor’s office is not surprised by controversy but is confident that the new system will be good for Albuquerque; businesses and residents alike and feel that their team put together a well thought out design plan.

What Are Your Thoughts About the ART Project? Share Them Here!

Do the pros outweigh the cons? Is the year-long construction and noise worth the end result? Here at Keller & Keller, we know Albuquerque is a great place and think that any project that can connect people and drive opportunity to our city is a great one.

Complete the short form next and we'll be in touch within 12 hours.
Free Case Analysis