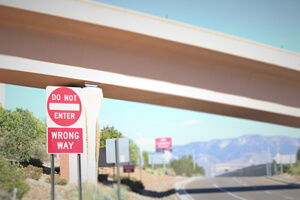 The most recent accident took place on September 24, 2016 when a drunk driver was heading south in the northbound lanes of I-25 near the 287 mile marker in Santa Fe. The fiery head on collision resulted in the death of the driver and the victim.

Following this horrific accident, Santa Fe mayor Javier Gonzales is speaking up. Mayor Gonzales has requested that the New Mexico Department of Transportation conduct a study of what he calls a “deadly stretch of highway.” He believes that there may be a design flaw that leads to wrong way collisions. Though alcohol was a factor in the most recent accident, it appears that there are other reasons that this pattern of wrong-way crashes have occurred and Mayor Gonzales asks that the DOT investigate the problem before another life is taken.

Contact Our Attorneys for Help With Your Car Accident Claim

If you or a loved one have been injured in an I-25 collision, the car accident lawyers at Keller & Keller would encourage you to call us immediately. We would be honored to investigate the accident and hold all responsible parties accountable. Our experienced New Mexico attorneys have not only handled thousands of car accident and wrongful death claims, but have also filed numerous tort claims against local and state government entities.