Hurt by a fire in a Polaris vehicle? You may deserve compensation. 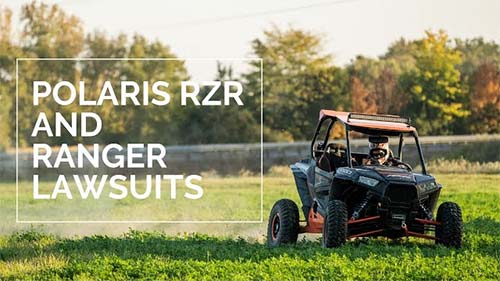 Polaris RZR & Ranger Vehicle Fires and Rollovers: Our Attorneys Are Here for You

Polaris has recalled more than 450,000 vehicles made between 2008 and 2018—most for fires and crash hazards—linked to at least four deaths and dozens of serious burn injuries. Most of the recalls have been issued for the Polaris RZR, the first off-road vehicle made primarily for recreational driving.

These vehicles are heavily marketed by Polaris as a fun, safe way to adventure and are favorited by thrill seekers. The vehicles are known as “side-by-sides” for the way its occupants sit beside each other. The RZR comes in two and four seat versions and price ranges from $5,300 to over $30,000. These Polaris vehicles have an avid following.

The fire hazard extends to other Polaris side-by-sides which have the same engine as the RZR. The Polaris Ranger, which is mainly purchased for commercial use, has also had several reported fires. These vehicles have shown serious design and manufacturing defects yet Polaris continues to put the public at risk.

A Global Recall of Polaris Vehicles

There is significant brand recognition and trust for Polaris in the RZR and off-road communities. There are even yearly gatherings for enthusiasts put on by Polaris. Because RZR was Polaris’ big money maker, the company was hesitant to issue a recall. Without a recall, Polaris was not required to inform customers or the Consumer Product Safety Commission (CPSC) of the fires. Finally in 2016 Polaris told CPSC that the hazard was worse than previously reported and issued a global recall.

Due to Polaris’ delayed reporting of defects in the RZR and Ranger models, the company was slapped with one of the largest fines in CPSC history – a whopping $27.25 million dollars.

Victims of Polaris fire incidents have suffered serious burn injuries some of which have resulted in death. Most incidents report spontaneous eruption of flames with little time to react. Because of the 5 point harness (a needed safety feature) it is difficult for passengers to escape the vehicle once it is in flames.

Unfortunately, these Polaris ATV's pose serious safety risks due to the fire and burn hazards. A September 2019 article from the New York Times highlighted these risks.

The ProStar engine was debuted on New Year's Eve 2010. But within months, the Polaris head of product safety was receiving complaints about the plastic panels that separate the passengers from the engine melting and smoking. At a 2011 meeting, a recommendation to issue a recall was ignored. Instead, Polaris issued a bulletin to dealers, recommending they attach aluminum sheets to the damaged panels. That way, Polaris avoided notifying the Consumer Product Safety Commission about the fires, as well as the negative publicity that would come along with a recall. Read More: Polaris ProStar Engine Fire Risks

Polaris used to outsource the manufacture of their engines, but to save costs in producing a more powerful engine, they developed their own engine called ProStar. On the ProStar, the exhaust pipe is housed inches behind passengers and too close to key components without adequate ventilation. The exhaust creates hotspots inches behind passengers that can degrade key components and ignite debris.

What Has Polaris Done to Fix the Problem?

According to the CPSC website, consumers with recalled models should immediately stop using the recalled vehicle and contact Polaris for a free repair. Polaris is also contacting all purchasers directly. Owners can search by VIN number on the Polaris website to see if their vehicle has been recalled.

However, despite the recalls, some Polaris RZRs and Rangers are still catching on fire. People are still being seriously injured. In fact, the CPSC has issued a statement that users of vehicles were still reporting fires in vehicles that had already been repaired as part of the recall.

Which Polaris Vehicles Have Been Recalled?

Polaris has issued a recall for all 2015 and 2016 Sportsman 850 and Sportsman 1000 models. However, the recalls did not end in 2016. In early 2017, Polaris recalled approximately 13,500 RZR and General side by sides. This was after another 133,000 RZR Turbo and RZR 900 and 1000's were recalled in April 2016 for similar fire and burn hazards. Model year and model number of recalled vehicles are listed below. However, this list may not be comprehensive. Visit the Polaris website and enter your vehicle's VIN or model year and model number to see if your Polaris ATV has been recalled.

Do I Have a Case Against Polaris?

If you or a loved one was operating a Polaris vehicle or a passenger in a Polaris vehicle and had an incident that resulted in serious bodily injury or death you may have a case against the company. Call Keller & Keller right away for a free consultation to discuss your potential claim.

When Should I Hire an Attorney?

As soon as possible. Hiring an attorney right away will ensure that evidence can be preserved and that every angle is investigated immediately. At Keller & Keller we have experts on hand and prepared to investigate the vehicle, secure the scene and interview witnesses as soon as possible.

How Long Will My Case Take to Settle?

Polaris cases are aggressively defended by Polaris’ legal team. For this reason, it is not uncommon for these cases to take several months. In most instances, it isn’t possible to give an exact estimate before our attorneys and experts have had a chance to review your case.

What Does it Cost to Hire Keller & Keller?

We offer a Zero Fee Guarantee to all of our clients. This means that you owe us nothing unless a recovery is made on your behalf.

No matter where you live, if you were injured or a have a loved one who was injured or died because of a Polaris incident, contact us today. Let us listen to your story and review your options with you.

Because of our powerful network, reputation for success, and multi-state presence, Keller & Keller welcomes the opportunity to work with other firms who have cases that require collaboration with an experienced team. Contact us today to put Keller & Keller's resources to work for your client's Polaris case.
Get Started Now

We Mean Business! Winning Since 1936!

Keller & Keller is an experienced and powerful law firm that has never feared big companies like Polaris. In fact, we take it personally when someone is injured through no fault of their own. It doesn't matter where you live or how big or small you believe your case to be: We can help. We will get answers. We work to win.

Since 1936, our attorneys have been fighting for the rights of people who were ignored or insulted by insurance companies. Our vast and diverse network of experts and legal resources are luxuries we can call on at any time for any case. And when a victim of Polaris' negligence chooses Keller & Keller, they pay us nothing until we win the case.