Holding Negligent Albuquerque Bicycle Riders Accountable When They Cause a Crash

Albuquerque and other cities in New Mexico have their fair share of bicycle commuters and recreational riders. Most people who choose to get around on a bike are aware 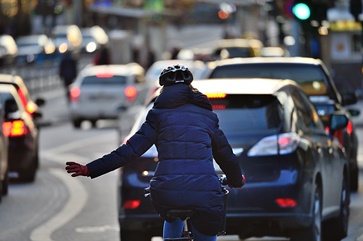 of the dangers involved in sharing the road with cars and take precautions, such as wearing a helmet and understanding the rules of the road.

There is no doubt that cyclists are at risk of serious injury and death if they are hit by a car, and drivers should be made to pay when they are negligent and hit a cyclist. But what if it is the biker’s own actions that cause the crash, and the driver of the car is injured? Being vulnerable does not put a bike rider above the law when it comes to safety and responsibility. Here’s what you need to know if you are a driver who is injured when a cyclist’s reckless actions cause a crash.

How a Cyclist Can Cause a Crash

We understand that cyclists are injured and killed by careless drivers every day in New Mexico. In fact, we represent injured bicyclists when the driver of a car is at fault. However, it is not always the driver’s actions that cause an accident. In fact, many drivers are very aware of bicyclists and do their part to keep riders safe. All road users—drivers, truckers, pedestrians, and cyclists—have a duty of care to others on the road. When a cyclist breaches that duty and a driver is seriously injured as a result, they should be held accountable for the damage they cause. A bicyclist could be found at fault in causing a crash in the following situations:

It is important to note that you will only have a claim for damages against a negligent cyclist if you suffered injuries in the crash. Clearly, it is usually the biker who takes the brunt of a collision with a car, but if the biker’s actions forced you into another car, road barrier, tree, or other obstacles, and you were hurt, you could have a claim, even if the biker is also injured.

How Can You Make a Cyclist Pay after an Accident?

Granted, this is not going to be an easy claim to make. Ideally, you called the police at the time of the crash, and they noted the biker’s negligent actions in their report. Then, you went to urgent care or the emergency room to have your injuries documented and treated. If you are facing costly medical bills, we encourage you to contact our office in Albuquerque to discuss the possibility of holding the cyclist responsible. If the rider has liability coverage in an automobile or homeowners policy, it’s possible that a claim could be made to cover your damages. Fill out the contact form on this page, or call us to learn more. The sooner you reach out to our team, the better!