Car-Deer Accidents Increase During the “Rut,” From October to December

When the rut is on, drivers should beware.

The so-called "rut" is the annual mating season for whitetail deer, stretching from October through December in Indiana. This is the time when deer 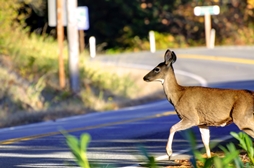 populations are most active and when they are most likely to be involved in accidents with cars.

According to the Insurance Institute for Highway Safety, accidents involving deer or other large animals account for close to 200 human deaths every year. They estimate that there are over a million deer-vehicle collisions each year. Missing from these statistics are the hundreds of thousands of personal injuries sustained by people involved in deer-related incidents.

The farms and fields of the Midwest are a haven for deer herds. Car-deer accidents are less problematic in urban environments than along the country lanes that crisscross Indiana.

Your Risk of Hitting a Deer in Indiana

State Farm’s 2016 annual deer report ranked Indiana 23rd among the 50 states for the probability of car-deer accidents. Indiana’s ranking remained the same from 2015, giving drivers a 1 in 136 chance of hitting a deer. To compound the problem, deer are primarily nocturnal, preferring dusk to dawn for their activity; these hours of decreased visibility are also the most dangerous for drivers.

Because deer are wild animals, they cannot be held liable for causing accidents with vehicles. If you've been involved in an accident with a deer as a driver, you have almost no chance of winning a recovery. Many people who have been injured as a passenger in a crash involving a deer wonder whether they might be entitled to a recovery. The answer is: maybe.

The only way to determine whether or not you would be able to make a recovery for your injuries is by contacting an experienced personal injury attorney. Deer-related accidents can be very complicated. They are far from the day-to-day crashes often seen on our highways.

Take Precautions to Avoid a Collision With a Deer

To reduce the likelihood of striking a deer with your vehicle, take the following precautions:

Call Keller & Keller With Questions About Your Collision With a Deer

If you were injured as a passenger in a car that hit a deer, protect your rights by contacting the experienced Indiana accident attorneys at Keller & Keller. These cases are complicated, but we may be able to help. Connect with us today.