Johnson & Johnson Knew the Dangers of Talc for Years 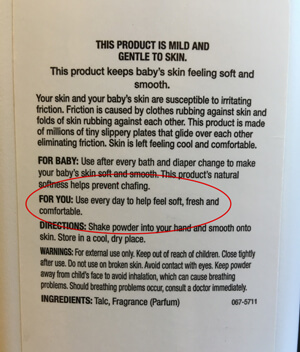 May 2020 Update: Read the latest about the Johnson & Johnson lawsuit here.

Johnson & Johnson has now lost two major verdicts to women who not only proved that their ovarian cancer diagnosis was related to the use of Johnson & Johnson’s talcum powder products, but that the company failed to warn, was grossly negligent, and withheld medical information from the public. The pharmaceutical giant now owes millions of dollars to these women and will likely be ordered to pay millions more.

Historically, Johnson & Johnson has marketed Baby Powder as a symbol of cleanliness and freshness and to be used on the skin to absorb wetness, eliminate friction and reduce odors. The bottle itself specifically targets women by stating, “For you, use every day to help feel soft, fresh, and comfortable.” Marketing promoted Baby Powder and Shower to Shower to women as a feminine hygiene product with their slogan, “A sprinkle a day keeps odor away.” Furthermore, internal J&J documents presented at trial show that when sales of talc products declined, the company’s strategy was to target African American and Hispanic women as the highest users of talcum powder.

The first verdict of $72 million was awarded to the family of Jacqueline Fox, a woman whose death from ovarian cancer was linked to decades of using Johnson & Johnson’s popular talc products: Baby Powder and Shower to Shower. In the courtroom, the jury was able to hear an audio recording of Fox recounting 35 years of J&J’s talc products for feminine hygiene. Fox died 2 ½ years after her diagnosis. Fox’s pathologist found talc in her ovaries. The trial itself took over 3 weeks, but the jury deliberated for only 5 hours. J&J’s internal documents were a large part of the case. These documents showed that the company had known of the relationship between talc and cancer since the 1970’s, and actively undertook to hide the truth—not only from government regulation but from the public.

Jurors that found for Fox were angered that a company as well-known as J&J had covered up this information. One juror stated, “They could have at least put a warning label on the box but they didn’t. They did nothing.” An epidemiologist who testified for Fox estimated that about 10 percent of those who die from ovarian cancer each year (14,240 women) have cancers linked to talc.

The second verdict came out of the same St. Louis court as the first, and awarded $55 million to Gloria Ristesund, a woman whose use of the company’s talc products resulted in ovarian cancer. Gloria told the jury that she used Johnson & Johnson’s products on a daily basis for decades. Although Gloria’s cancer is in remission, she had to undergo a hysterectomy and other related surgeries. 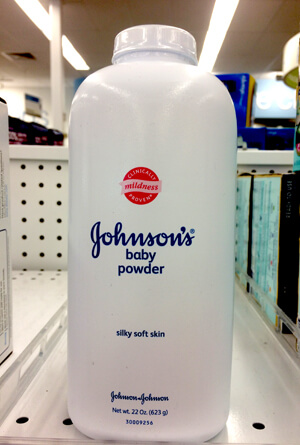 At times relevant to the lawsuits, Johnson & Johnson marketed its talc products knowing that the intended and foreseeable use was to use the products in the genital area. In 1971 the first study was conducted that suggested a relationship between talcum powder usage and ovarian cancer. In 1982, the first epidemiologic study found a 92% increased risk in ovarian cancer with women who reported genital talc use. In 1993, the United States National Toxicology Program published a study finding clear evidence that talc is a carcinogen. Based on this information, it is clear that J&J knew of the dangers of using talc.

Instead of pulling their products off the market, placing warning labels on the bottles or using an alternative (corn starch is a known effective alternative to talc), J&J responded by helping to form the Talc Interested Party Task Force (TIPTF) in conjunction with the Cosmetic Toiletry and Fragrance Association (CFTA). The purpose of TIPTF was to pool financial resources of cosmetic companies in an effort to defend talc use at all costs and prevent regulation of any type over this industry. The TIPTF hired scientists to perform biased research.

In 1994, the Cancer Prevention Coalition mailed a letter to J&J’s then-CEO requesting that J&J withdraw talc products from the market in favor of non-harmful alternatives like cornstarch powders, or at a minimum, places warning labels on the bottles. In 1996, the condom industry stopped dusting condoms with talc due to health concerns. Finally, in 2006, both the International Association for the Research of Cancer and the Canadian government classified talc as “highly toxic.” Yet, J&J still did nothing. The defendants failed to inform its customers and users of the products of the known health risks. Furthermore, the defendants produced and distributed false, misleading and biased information regarding the safety of its products.

The bottom line is that Johnson & Johnson knew that there was a huge risk and did nothing. Women across the country have used talcum powder every day for decades, and if they knew what J&J knew, they would have done something; they would have stopped using the product and decreased their chances of being diagnosed with ovarian cancer.

6 Defective Drug Questions You Should Ask

1What if the drug I'm taking has been recalled? 2How do I become part of a class-action lawsuit? 3How long do these cases take to settle? 4How does a dangerous drug get released to the public? 5What are the 5 types of recovery available to a defective drug victim? 6Which defective drug cases is Keller & Keller currently investigating?