The (Augmented) Reality of Pokémon Go

A new craze has taken over our urban landscape. Look around and you will see people of all ages walking aimlessly down the street with their phone held out in front of them. No longer are people inside attached to their TV, computer or video game. They are now roaming around outdoors attached to their cell phones—trying to catch Pokémon.

The new Pokémon Go app uses your camera, location and augmented reality to place Pokémon in the world around you. Basically, the game lays a semi-transparent Poke-world over your actual location which you then can explore by physically walking around. The object of the free app is to catch as many Pokémon characters as you can and then to use them to battle at “gym” locations.

The game has had an overwhelming response, with so many users downloading that the servers have had trouble keeping up. While some are praising the health benefits of the app (exercise and getting outdoors), others are pointing out that there may be some serious dangers as well. 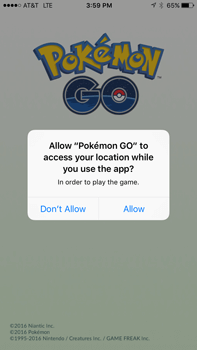 Amidst the craze, security bloggers noticed that the game’s privacy settings may pose a significant security risk. Not only does the app use the phone’s camera and location, but it also gains full access to contacts, emails, calendars, photos and other stored data. (A patch has since been released that removes the app’s access to unnecessary information).

The app has also already been used to stage at least one robbery. If you decide to play Pokémon Go, take a look at these tips to protect your privacy.

Another serious problem is that the distraction of playing Pokémon Go has caused users injury (and perhaps loss of common sense). Many users have reported minor scrapes from chasing Pokémon a little too enthusiastically. Other more serious injuries have been reported.

A 15 year old chasing a Pokémon crossed a 4 lane intersection and was struck by a vehicle. Another user reported that he fell down a ditch and fractured a bone in his foot. Other injuries have resulted from playing while driving. Doctors have issued public warnings about the risks of playing Pokémon Go stating that while they appreciate that the app encourages outdoor activity, people need to be aware of their surroundings and under no circumstances should they play while driving.