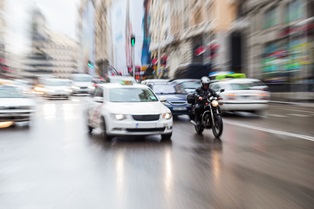 Motorcycle riders are some of the most vulnerable motorists on the road. Even when riders follow the rules of the road and wear protective gear, such as helmets and Kevlar suits, they can be seriously injured when they are hit by a car or truck. As a motorcycle rider, you deserve the respect and space you are entitled to when riding through city streets and on the highway. When a driver is careless or negligent and fails to allow you the room you need to ride safely, you should not have to pay for the resulting damage—whether to your bike or your body. We review some of the common mistakes drivers make that leave motorcyclists injured—sometimes fatally so.

According to the National Highway Traffic Safety Administration (NHTSA), nearly 5,000 motorcyclists were killed in 2015 and 88,000 were injured. Motorcycle riders are 29 times more likely to be killed in a collision than occupants of a car or truck. Despite only making up 4 percent of the vehicles on the road, motorcyclists accounted for 14 percent of all traffic fatalities and 4 percent of all injuries in 2015. The risks are clearly real and as drivers become more distracted and less attentive to the road, the danger to bikers will only increase.

What Drivers Do That Endanger Bikers

In most cases of motorcycle crashes caused by the driver of a car, the driver failed to see or yield to the motorcycle. This can happen for several reasons, including the following:

If a driver caused the crash that left you injured or a loved one dead, you will need an attorney who specifically handles motorcycle accident cases. A motorcycle crash attorney will know what kinds of negligent driver behavior to look for in order to prove the driver’s fault and get you the compensation you need and deserve to recover from your devastating accident. In Indiana, that attorney can be found at Keller & Keller. Contact one of our Indiana offices today to discuss your motorcycle crash injuries.