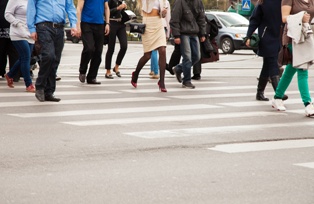 Pedestrian accidents are on the rise across the country, and New Mexico is no exception. In fact, New Mexico had the highest rate of pedestrian fatalities per capita in 2017 and the first half of 2018. Why has it gotten so dangerous for walkers and runners around Albuquerque and Santa Fe? We take a look at the causes of these crashes here.

Crash Statistics That Make You Want to Stay Home

According to the Governors Highway Safety Association (GHSA), 250 more people were killed in pedestrian accidents across the U.S. in 2018 than in 2017. The 6,227 pedestrians killed in 2018 represent the highest number of fatalities in 28 years. New Mexico saw a 47 percent increase in deaths between the first half of 2017 and the same period in 2018. We earned the dubious distinction of being the deadliest state per capita for pedestrians, with 2.26 deaths for every 100,000 residents. While this is an improvement over 2017, when New Mexico had 3.53 pedestrian deaths for every 100,000 residents, repeating as the deadliest state is not an honor to be proud of.

Given the improvements in technology that have brought us more visible street crossings and obstacle warning sensors in vehicles, it may seem surprising that we are seeing more pedestrian deaths than ever. However, for every safety step forward we take, we often take two steps backward. Some of the factors that contribute to the increase in fatalities include:

Not surprisingly, as pedestrian fatality rates are at a 28-year high, injury rates have also increased. According to the Centers for Disease Control and Prevention (CDC), nearly 130,000 pedestrians were treated in emergency departments for crash-related injuries in 2016.

When and Where Pedestrian Accidents Happen

Intersections are not the most common location of fatal pedestrian accidents—only 18 percent of fatalities happen there, according to the National Highway Traffic Safety Administration (NHTSA). Other data from NHTSA includes:

While these statistics tell us who may be most at risk, anyone can be hit by a car and seriously injured or killed. When this happens, you need an experienced pedestrian accident attorney by your side.

Keller & Keller’s Albuquerque accident lawyers handle pedestrian accidents throughout New Mexico. We have more than 75 years of experience helping injured people, and many of those cases have involved pedestrian injuries and wrongful death. The sooner you call our office, the sooner we can begin investigating your claim. To speak to an attorney immediately, call 800-253-5537, or you use our free contact form on this page.