Prilosec, Prevacid, and Nexium Have Been Linked to Chronic Kidney Disease 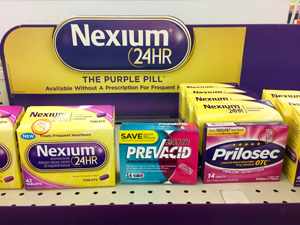 Popular and widely marketed heartburn medications known as proton pump inhibitors, or PPIs, such as Prilosec, Prevacid and Nexium, have been linked to chronic kidney disease. Recent medical studies have warned doctors and consumers to use caution.

The attorneys at Keller & Keller are currently investigating potential claims on behalf of individuals who have suffered serious injuries after taking these drugs. If you or a loved one has been diagnosed with, or hospitalized for, chronic kidney disease, kidney failure, or acute interstitial nephritis (AIN), please contact the defective drug team at Keller & Keller right away. Do not change or stop taking your medication without first consulting your doctor.

What Are "Proton Pump Inhibitors"?

Proton pump inhibitors (PPIs) were introduced in the 1980s for treatment of gastrointestinal reflux disorders, peptic ulcers and other acid related disorders of the upper gastrointestinal tract. Some of the most well-known and widely marketed PPIs include Prilosec, Prevacid and Nexium. These drugs are available both as a prescription and over the counter.

PPIs work by stopping cells in the stomach lining from producing too much acid. Stopping the production of acid helps to prevent ulcers and reduce acid reflux symptoms such as heartburn, regurgitation, bloating, and abdominal pain.

Studies Show that PPIs May Be Connected to Kidney Disease

The Journal of the American Society of Nephrology released a study in April of 2016 revealing that PPIs may dramatically increase a person’s risk for kidney failure and kidney disease. The study analyzed patients for five years and found that patients who took PPIs had a 96%incresed risk of developing kidney failure and a 29% increased risk of chronic kidney diseased compared to patients who took an alternative drug.

Another study published by the Journal of the American Medical Association showed a link between taking PPIs and acute interstitial nephritis (AIN) which is a problem that can lead to kidney failure.

If You Take These Medications, Talk to Your Doctor Before Stopping

If you are currently taking a PPI, do not stop use without first consulting with your doctor. If you are concerned about these serious side effects, ask your doctor about a safer heartburn remedy. Consumer Reports found that up to 70% of people who take PPI might not need such a potent acid reducer and could probably get just as much relief with a safer drug. Research shows that the link to kidney disease wasn’t seen in medications such as Zantac and Pepcid.

These PPI drugs are some of the most widely prescribed in the world. An estimated 15 million Americans are prescribed PPIs each year according to Nephrology News, in fact the authors of the research study published in the Journal of the American Society of Nephrology suggest that PPIs are overprescribed.

If you suffer from acid reflux or heartburn, taking Prilosec, Prevacid or Nexium may seem like a foolproof solution and perhaps even alleviates all of your symptoms. However, taking these drugs could be causing some much more serious health problems. If you have been taking these drugs and have been diagnosed with Acute Interstitial Nephritis (AIN), kidney disease or kidney failure, contact Keller & Keller for your free defective drug consultation today.

6 Defective Drug Questions You Should Ask

1What if the drug I'm taking has been recalled? 2How do I become part of a class-action lawsuit? 3How long do these cases take to settle? 4How does a dangerous drug get released to the public? 5What are the 5 types of recovery available to a defective drug victim? 6Which defective drug cases is Keller & Keller currently investigating?