Impaired Driving by Commercial Truckers Puts Many Lives in Danger

It takes a great deal of training and skill to safely operate a tractor-trailer on Indiana’s highways. A truck driver must be fully focused on the task of controlling his 80,000 pound vehicle at all times. When the driver is even slightly impaired by drugs or alcohol, his ability to drive safely is compromised, and the lives of others on the road are put at risk. This is why truck drivers are held to higher standards when it comes to drug and alcohol use, and why in the event of a serious crash, a qualified truck accident attorney will investigate the possibility that the driver was impaired. 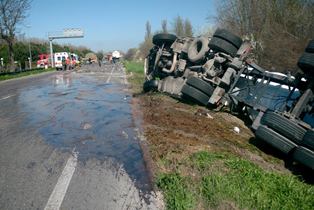 According to the Federal Motor Carriers Safety Administration (FMCSA), driver use of illegal drugs or alcohol causes an estimated 4,000 fatal and injury crashes each year. These crashes occur despite the stricter limits on acceptable blood alcohol content (BAC) levels set by FMCSA. While Indiana drivers over the age of 18 are considered to be driving under the influence with a BAC of .08 percent, commercial drivers are limited to a BAC of .04 percent. FMCSA further stipulates that commercial drivers may not operate their vehicles within four hours of using alcohol.

In order to ensure that commercial drivers are not prone to drinking on the job, employers must conduct background checks for previous convictions for driving under the influence before hiring a driver; and must administer random drug and alcohol tests of their drivers. Every trucker involved in a crash is also subject to drug and alcohol tests and must submit to a test if it is ordered by a Department of Transportation officer based on reasonable suspicion of drug or alcohol use.

While some people feel energized when they drink, alcohol is actually a depressant, which means it acts to slow down functions of the central nervous system. Some ways alcohol use can affect one’s ability to drive include:

Injuries That Can Result From Truck Crashes

When an impaired truck driver rams his rig into the back of an unsuspected Ford Focus, the results can obviously be devastating. Victims of truck crashes who are lucky enough to survive often experience the following tragic injuries:

Injuries such as these require long-term and expensive treatments. Often, these injuries also require lifelong care in an assisted living facility. When you or a family member suffers trauma in a truck crash, you'll need an attorney with experience in negotiating settlements for catastrophic injury.

Drug Use by Truck Drivers

More common than alcohol abuse by truck drivers is the use of over-the-counter, prescription, and illegal drugs. According to the FMSCA causation study, over-the-counter drug use accounted for 17 percent of all fatal and injury crashes in their study. Often, these drugs are used as stimulants so a trucker can continue to drive after feeling tired or unfocused. Delivery deadlines also push some truckers to take cold and flu medicines instead of making the time to recover from illness. Pressures of the job and poor working conditions also contribute to widespread driver use of illegal substances such as marijuana and cocaine, according to a study reported by Reuters. While marijuana affects brain function much like alcohol does, cocaine and other stimulants can cause vertigo, agitation, hallucinations and change perceptions and reactions.

If you're the victim of an Indiana truck crash, our experienced truck accident attorneys will make sure the driver of the truck was tested for drug and alcohol use. If this proves to be a contributing factor, our attorneys will work to ensure you're fully compensated for your injuries. Call our office today to discuss your case.