In the early 90's, big corporations paid millions of dollars to distort one of our country's most well-known personal injury cases, often referred to as the "McDonald's Hot Coffee Case." The purpose of the campaign was to sensationalize a terrible accident and twist the version of events in a way that would encourage tort reform and give rise to public anger over the supposed rise in our country's frivolous lawsuits.

The campaign was designed to paint the victim, Stella Liebeck, as money-hungry and to paint personal injury lawyers as ambulance chasers. Unfortunately, it was highly effective, and people today still believe the following 5 myths about the hot coffee case that have forever shaped their views about America's legal system.

Stella Liebeck was a middle-aged lady who drove away from McDonalds drive-thru with a cup of coffee between her legs and while she was traveling down the highway the lid popped, spilling it between her legs.

Stella was a 79-year-old grandmother who was a passenger in a car driven by her grandson. At the time of the spill they were parked in McDonalds parking lot and Stella had been attempting to remove the lid of her coffee to add cream and sugar. When the lid popped off the coffee—which had been served at a scalding temperature of 190 degrees—poured between her legs and soaked into the sweatpants she was wearing.

She got the type of burn you'd expect from spilling hot liquid on your skin. 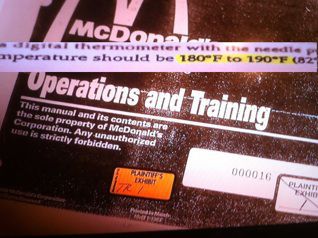 The burns Stella sustained were the worst possible type: third-degree burns that required multiple skin grafts, skin debridement treatments, over a week in the hospital, and ongoing physical therapy. As a result she was left with permanent scarring in the area around her groin. McDonalds was not only knowingly serving coffee at scalding temperatures, they also had reference to it in their training manual and had received over 700 prior complaints.

She demanded a million dollars, she was just money-hungry.

Seventy-nine year old Stella had never filed a lawsuit against any one person or business in her life. Her request was that McDonalds pay her medical bills and lost wages, totaling approximately $20,000. McDonalds offered her $800.

Stella was awarded $200,000 in compensatory damages for her burn injuries by the jury, but the judge ruled that Stella was 20% at fault for her injuries and reduced that amount to $160,000. The headlines were made when the jury awarded Stella punitive damages in the amount of $2.7 million, which amounted to two days worth of McDonald's coffee sales. Stella never received an amount close to that, as the judge reduced the punitive award to $480,000. McDonald’s appealed this decision and Stella and the fast food giant eventually settled out of court for an undisclosed, lesser amount.

This case is proof that an injury lawyer will take anyone's case.

Unfortunately, the opinions some people hold about personal injury lawyers are rooted in a sensational or dramatized news report or headline, similar to the "hot coffee case," in which legend and myth sometimes will obscure the facts.

Keller & Keller is a statewide personal injury firm representing clients throughout all of New Mexico, but what most people may not know is that we accept a very small percentage of the calls we receive. The standard we set for ourselves, and the work we do on behalf of our clients is exceptionally high, and that's why we only help people with serious injuries who were harmed through no fault of their own.

1 Comments
I remember learning the reality of this case in an undergraduate business law class. McDonald's had been subjected to frequent complaints about the temperature of their coffee but refused to change because they targeted workers who would fill those big coffee canisters and drink from them all day. The higher temp allowed the coffee to remain hot for a long period of time (go read about thermodynamics). To this day I STILL find myself correcting people on their incorrect perception of this case. It often comes from intelligent and generally well informed people and leaves me skeptical about what I personally perceive about issues surrounding me.
by Alan October 31, 2016 at 11:40 PM
Post a Comment

Complete the short form next and we'll be in touch within 12 hours.
We've helped injured people and their families for over 75 years.