Many of us remember the deadly dust storm that blew across I-10 in southwestern New Mexico in the summer of 2017. Eight people lost their lives in two separate traffic crashes in Hidalgo County caused by the blinding conditions. Since then, the New Mexico Department of Transportation (NMDOT) has installed dust detectors that can predict when a dust storm is coming and send warnings to electronic signs along the highway—much like other severe weather alerts. NMDOT has also added shoulders along I-10 so that drivers can pull off during dust storms and billboards that educate drivers about what to do in a dust storm. Why all the effort for something that rarely happens? Because it seems likely that dust storms will become more frequent across New Mexico.

Our Dry Conditions Are Perfect for Deadly Dust Storms

Dust storms happen when very strong winds pick up dry soil and debris and lift them up into the air. Given enough wind and enough debris, a dust storm can darken the sky and limit visibility to just a few feet. The last time dust storms were a serious threat in the U.S. was back in the 1930s during the Dust Bowl. History 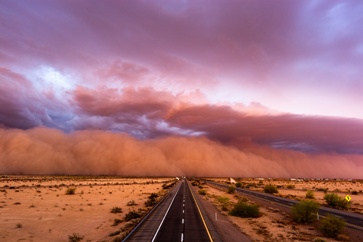 classes often focus on Oklahoma as the hardest-hit state, but northwest New Mexico was also seriously impacted by the Dust Bowl. In fact, many of Dorothea Lange’s famous photos of Dust Bowl victims were taken in New Mexico.

Our arid climate and wide-open spaces make New Mexico very vulnerable to dust storms. Add to that the impact of climate change—rising temperatures and less rainfall—and we could be on the verge of a modern-day Dust Bowl, 100 years after the last one. Just this past March, Otero County and Las Cruces were hit with a dust storm that saw wind gusts up to 65 mph and blinding conditions that changed the color of the sky. As the chances of these storms increase across the state, it’s important that drivers know what to expect and what to do if they are caught in one.

Driving in a Dust Storm

Multi-car pile-ups are not uncommon in dust storms. Dust storms, like flash floods, come out of nowhere. Unlike blizzards, ice storms, and torrential downpours, there is often no warning at all when a dust storm strikes. You can’t check a radar weather map before leaving the house to make sure you won’t run into a dust storm. However, you can often see the wall of dust approaching, giving you vital seconds to decide what to do. Just like other types of weather conditions that decrease visibility, if you are caught in a dust storm while driving, you should do the following:

What if you do everything you’re supposed to do in a dust storm, but someone else hits you, and you are seriously injured? You might be able to hold the other driver accountable with the help of our car accident legal team.

But First, You Will Have to Prove Negligence

As with any car accident, you will have to prove that the other driver was negligent when they hit you. That is harder to do in severe weather conditions such as a dust storm because accidents can happen even when the driver is exercising extreme caution. However, if it can be shown that a driver was ignoring the hazardous conditions, speeding, weaving in and out of traffic, tailgating, or was distracted by a cell phone or driving while impaired, you could have a strong claim for damages.

Dust storms are uncommon and brief on New Mexico’s highways, but if you are driving in one, you could be seriously injured. If a reckless driver plows into you during a dust storm, you should contact an experienced car accident attorney as soon as possible after the crash to ensure that your claim for compensation is as strong as it can be. Reach out to Keller & Keller in Albuquerque for help.