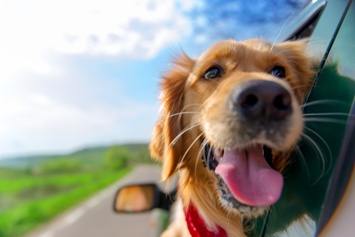 Dogs love a car ride! Noses out the window, sniffing as the world whizzes by—what could be better? But what happens when Daisy decides to hop in the driver’s lap? Or what if Max gets into a shopping bag in the back seat and the driver has to pull him back? Unrestrained dogs in the car can cause all kinds of dangerous distractions that could lead to a crash. When an accident is caused by a pet passenger, the driver should be held accountable for the resulting damages and injuries.

Dangers of Unrestrained Dogs in the Car

Around 85 million American families own a dog, and over half of them report driving with their dog in the car at least once a month. According to a 2011 AAA survey, only 16 percent of people who travel with their dogs put them in a crate or restrain them with a harness while the vehicle is moving. These drivers also admit to:

Looking away from the road for just two seconds doubles your risk of being in a crash, so the distractions caused by man’s best friend could prove fatal—for the driver, the dog, or an unsuspecting occupant of another car.

Restrain Your Pets for Everybody’s Safety

Dangerous distractions can be avoided by properly restraining your dog when he rides in the car with you—or by leaving him at home. While it is not illegal in Indiana to drive with an unrestrained dog in the car, efforts have been made to pass legislation to protect motorists from this potential distraction. In January 2017, Senator Dennis Kruse introduced SB 32, a bill making it illegal to drive with a dog in your lap. The bill was referred to the Committee on Homeland Security and Transportation but is no longer active. However, a driver who allows a dog to distract them while driving could be cited for reckless driving.