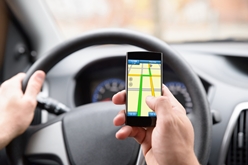 We have known for years that distracted driving is a problem on America’s roads, but a recent survey shows just how much of a problem it is. The AAA Foundation for Traffic Safety’s 2017 Traffic Culture Survey revealed that 45 percent of drivers admit to reading a text or email message while driving and 35 percent say they typed and sent a message in the previous 30 days. According to the survey, Americans believe distracted driving is a bigger threat to safety than aggressive, drugged, and drunk driving. Despite the awareness of the danger, AAA believes that distracted driving may play a part in half of the 6 million motor vehicle crashes reported each year.

These frightening statistics make it clear: If you were injured in a crash in Indiana that was not your fault, it’s likely that the other driver’s distraction contributed to the crash. The experienced attorneys at Keller and Keller will investigate all possible factors to maximize your damages.

While it’s not always easy to determine the cause of a crash after the fact, especially when it may involve some form of distraction, officers at the scene do their best to identify signs of possible distraction that may have contributed to the crash. Along with noting the presence of passengers, food, pets, and technology, cell phone activity may be investigated to find a cause. The following are important statistics regarding distracted driving accidents:

Most of us think of cell phones when we think about the causes of distracted driving, but phones are not the only distraction. Drivers are often guilty of taking their eyes or their mental focus off of the task of driving by doing the following:

All of these forms of distracted driving leave behind evidence that can be discovered by investigators following a crash. If the accident that left you injured has no obvious cause, driver distraction should be considered.

In Indiana, it is legal for drivers over the age of 21 to talk on a handheld device while driving. However, typing, transmitting, or reading e-mail or text messages on a communication device is illegal for all drivers in Indiana and is a primary offense, meaning you can be pulled over and ticketed if a police officer sees you doing it.

Because Indiana is a fault state, knowing whether the driver who caused your accident was distracted behind the wheel may be very important to your personal injury case. The Indianapolis car accident lawyers at Keller and Keller will consider this possibility when building a claim against the at-fault driver. We offer a Zero Fee Guarantee to anyone who was injured by a distracted driver. This means that a consultation with any of our personal injury lawyers is free, and the only way our firm receives payment for its legal services is if a recovery is made on your behalf. Fill out the form on this page to get in touch with our Indianapolis law office today.