Can I sue a motorcycle rider for causing a crash?

If a motorcycle rider was reckless and caused the crash that led to your injuries, you can absolutely hold the rider responsible for compensating you for your losses. Just like any other motor vehicle crash, you will have to prove that the biker caused the crash and demonstrate that you have suffered losses as a direct result. Even if the motorcyclist 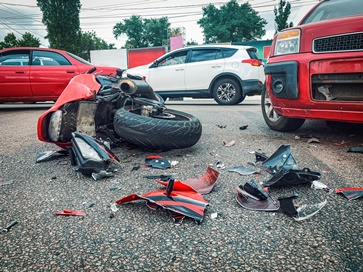 is more seriously injured than you are—a likely scenario given the lack of protection a rider has—their liability insurance provider should be made to compensate you.

At Keller & Keller, we proudly represent motorcycle riders when they suffer serious injuries in crashes caused by negligent drivers, but we also represent drivers injured when the biker is at fault. We are committed to getting accident victims the compensation they deserve when another motorist is careless or reckless.

How Reckless Motorcycle Riders Cause Crashes

Every crash, regardless of the types of vehicles involved, has to be analyzed to determine the cause. In a crash involving a motorcycle and a car, either driver could be at fault. However, when a biker engages in any of the following reckless actions, they are likely to blame:

At Keller & Keller, we know that it’s common practice to blame bikers for every crash, but when a negligent motorcyclist is truly at fault for causing your crash, we want to hear from you.

Bikers Must Have Insurance, and They Must Be Held Accountable

Indiana’s insurance requirement for motorcycles is the same as it is for cars. In terms of liability coverage, bikers must carry a minimum of $25,000 per person and $50,000 per accident in bodily injury coverage. Liability coverage is what is used to pay others who are injured by the insured rider.

The motor vehicle accident team at Keller & Keller will fight to get you the compensation you deserve from the negligent rider who caused your crash. Contact us to schedule your free case evaluation today.