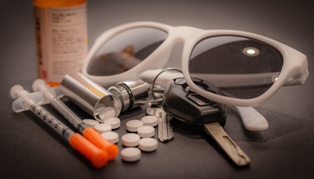 Whether they heed the warnings or not, every driver in New Mexico knows that it is dangerous—and illegal—to drive while intoxicated. If you have been drinking, you know that you can be pulled over by the police and that they can perform a simple road-side test to determine if you have had too much to drink. You also know that if you are a victim of a drunk driver, you can hold him or her responsible for your medical bills, property damage, and pain and suffering. What you may not know, however, is that driving after taking certain medications or street drugs can also impair driving and cause accidents. How do you know if the driver who caused your accident was under the influence of drugs? We look at this dangerous trend and what you can do about it if you are injured.

Drugged Driving Is Catching Up to Drunk Driving Across the Country

According to the National Institute on Drug Abuse (NIDA), the most recent data available comes from a 2016 survey, which found that 20.7 million people admitted to driving under the influence of alcohol in the previous year, while 11.8 million said they had driven after taking an illicit drug. However, this survey did not account for drivers using over-the-counter (OTC) and prescription drugs, which can also significantly impair the ability to drive safely. NIDA notes that no reliable road-side tests exist to screen drivers for drug use, so it is often impossible to know if a driver is under the influence of drugs. A 2015 study of motor vehicle fatalities commissioned by the Governors Highway Safety Association (GHSA), found that 43 percent of motorists who died in crashes had drugs in their system, while 37 percent tested positive for alcohol, suggesting that drug-impaired driving is on the rise.

The most common illegal drug found in the blood of drivers involved in crashes is marijuana, according to NIDA. In New Mexico, the recreational use of marijuana is illegal, but it is legal to use medical marijuana under certain circumstances. Drivers are not routinely tested for other illegal substances—and are never tested for OTC or prescription medications—so it is hard to know how common other drugs are. Like alcohol, drugs can impair a driver’s ability to safely control a vehicle, but, depending on the substance, drivers are affected in different ways. Common drugs and how they impair driving are as follows:

In New Mexico, the impaired driving law states, “It is unlawful for a person who is under the influence of any drug to a degree that renders the person incapable of safely driving a vehicle to drive a vehicle within this state.” This means that if the driver who caused your accident was under the influence of alcohol or any other drug, he or she has broken the law and should be held accountable for your injuries.

What If You Are Injured by a Drugged Driver?

It may be impossible to know if the driver who caused your accident fell asleep behind the wheel because he was taking cold medicine, or if he was too distracted to see your turn signal because he was high on marijuana. If law enforcement can establish drug use as a contributing factor to the crash, this will help your claim for damages. However, even without a positive drug test, if it is proved that the other driver’s recklessness caused the crash, you will have a strong personal injury claim.

As you recover from your injuries, you can trust the car accident attorneys at Keller & Keller to fight for the damages you deserve from the at-fault driver. Contact our New Mexico office today for a free consultation to discuss your case.