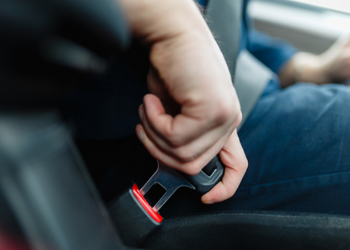 It’s hard to believe that there are people who choose not to wear seat belts when driving on Indiana’s roads. This simple device has saved countless lives since it was first introduced in the 1950s. Even though many cars now have safety technology to warn us when we drift out of a lane or to apply the brakes when we don’t see an impending collision, the seat belt is still the easiest and most effective safety device in modern cars. And if the protection it offers isn’t enough to convince you to buckle up, maybe Indiana’s seat belt and child restraint laws are.

According to the Centers for Disease Control and Prevention (CDC), there is no doubt that seat belts save lives. The CDC estimates that seat belts reduce serious crash-related injuries and deaths by about half. In 2014, the most recent year for which data is available, seat belts saved over 12,000 lives. However, they also note that people are more likely to wear seat belts when they are legally required to do so and could be ticketed and fined for not wearing one. In states where not wearing a seat belt is a primary offense—meaning you could be pulled over and ticketed if an officer sees you not wearing one—91 percent of drivers wear a seat belt. In states where seat belt laws are secondary offenses—you can only be ticketed if you are pulled over for another offense, such as speeding—the compliance rate is only 79 percent. So where do we stand in Indiana?

In Indiana, seat belt compliance is a primary offense. This means you can be stopped, inspected, or detained solely to determine compliance with the seat belt law. Under Indiana law, all occupants of a vehicle must be wearing a seat belt whenever the car is in forward motion. Any occupant over the age of 16 found to not be wearing a seat belt can be fined $25 for a first offense. Restraint laws for children under the age of 8 are even more restrictive.

Babies and children are too small for factory-installed safety belts to restrain them properly, so they must be placed in infant or child car seats. These are installed in the car using existing seat belts and specially placed anchors and tethers called the LATCH system. It is important to carefully follow instructions for both the car seat and the car when installing car seats. Indiana law dictates the following guidelines for infants and children:

The longer you require your child to sit in the back seat, the safer he or she will be. Remember that you set the rules for your car and it is your job to keep your child as safe as possible.