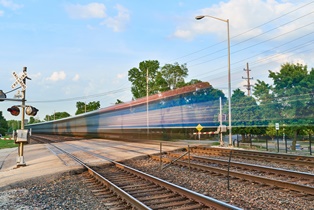 In the last few years, an improving national economy coupled with corporate demands for greater efficiency in the movement of materials has resulted in record profits for the railroad industry. Demand for transportation of products and goods by rail has soared—and that demand may have been noticed by the motoring public in the southern half of Indiana.

Two significant railroads which both serve portions of southern Indiana have either completed or are planning to complete multi-million dollar maintenance projects; some of these projects will allow significant increases in the number of trains per day, increases in speed, and in other cases, an increase in the length of trains.

The Indiana Rail Road Company (INRD) operates a line running from Indianapolis into Central Illinois. This particular line departs Indianapolis and continues through Johnson, Morgan, and Brown Counties before cutting through the heart of the Indiana University campus in Bloomington, then continuing a journey through the beautiful landscape of southwestern Indiana toward Illinois. In 2016, this regional railroad company completed a staggering $200 million in improvements; as a result of the rail, crosstie, and drainage improvements, the INRD has taken steps to increase efficiency on their line by increasing the train speed limits in many areas. For many decades, the maximum train speed along much of this line was 25 mph. After these recent improvements, the Federal Railroad Administration lists the freight speed limit for much of this line at 40 miles per hour.

The Louisville & Indiana Railroad Company (LIRC) operates a 106-mile line running from Indianapolis into Louisville, Kentucky. The line leaves Indy within sight of the University of Indianapolis and travels through communities such as Southport, Greenwood, Franklin, Columbus, Seymour, and Jeffersonville.

A 2013 agreement between CSX Transportation and the LIRC resulted in $70 to $90 million dollars worth of infrastructure improvements to the LIRC railroad line. Because of these improvements, the number of trains per day has increased from 2 to 5 between Indianapolis and Seymour, and from around 6 to 13 between Seymour and Louisville. The length of each train has increased to about 10,000 feet, and the speed has increased from 25 mph (FRA Class 2) to up to 60 mph (FRA Class 4). When a weight-restricted bridge near Columbus, Indiana, was replaced, the allowable weight of the cars carried on the line subsequently increased from 263,000 pounds to an industry standard 286,000 pounds per car.

Increased train speed and an increase in the number of trains will undoubtedly result in an increased risk of grade crossing collisions along these rail lines within our communities. Many of the grade crossings are protected with only a stop sign or white “cross bucks.” These crossings rely on motorists to perceive and yield to an approaching train without assistance from costly flashing lights, electronic/mechanical bells or lowering crossing gates.

Much of the Hoosier countryside traveled by both the INRD and the LIRC is home to rural communities heavily engaged in the agricultural trade. During harvest seasons, these communities are alive with slow-moving and noisy farm implements, trucks pulling farm wagons, grain trucks—not to mention the typical Hoosier motorists in their personal cars—perhaps just like you. In many cases, drivers cross the same railroad crossings in their local communities daily, and even if they did hear the horn of an approaching train, they knew they had time to navigate the crossing prior to the slow arrival of the train. But now, motorists must be aware that the speed and frequency of trains has increased. Train speeds through the pedestrian-rich campus of Indiana University have already increased 150 percent.

The Relationship Between Technology and Auto Accident Risk in Indiana

While much of modern technology strives to keep us safer, some of today’s technology increases our risk. Automobile manufacturers have made great strides in keeping exterior noises outside of the cabin from infiltrating into the passenger compartment of the modern passenger car or truck. Unfortunately, this well-intended peaceful feature works to the disadvantage of the occupants of a vehicle when it becomes more difficult to hear the horn of an approaching train. In a second example, motorists and pedestrians wearing and listening to noise-canceling headphones greatly increase the risk of not perceiving the approach of a train.

Trains have been around the Hoosier State for more than one hundred years. After decades of decline, the sudden surge in the utilization of trains for various forms of freight transportation throughout the country has been unmistakable. Trains bring the motoring public many benefits such as a substantial reduction in the number of commercial motor vehicles traveling our highways. Nonetheless, motorists must remember to “Stop, Look, & Listen” carefully for higher-speed and more frequent heavy-haul trains passing through local communities throughout southern Indiana.