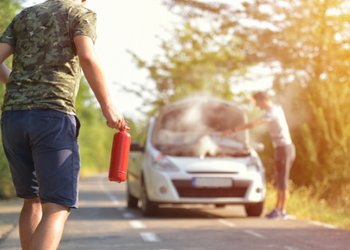 While the most common car crash injuries are whiplash and mild concussions, those involved in high-speed or multi-car collisions can suffer much worse injuries, such as traumatic brain injury, a broken pelvis, and severe burns. Car crashes are not a leading cause of burn injury, but when occupants are trapped in a burning car following a crash, they can suffer third-degree burns and lung damage from smoke inhalation. In this article, we explain the risks of fire in an Indianapolis car accident.

According to the American Burn Association, nearly half a million Americans receive emergency treatment for burn injuries each year and over 3,000 people die from fire or smoke inhalation. In 2016, 310 people died in vehicle crash fires, accounting for about 10 percent of all deaths by fire. The large majority of people—73 percent—were injured or killed in house fires in 2016, and only 5 percent were injured or killed in vehicle fires. However, understanding how these fires happen could save your life.

There are several types of burn injuries and doctors categorize the severity in degrees. Treatment plans will depend on the type of burn and how deep the burn goes. People can be burned by a variety of sources which result in the following types of burns:

No matter how the burn is caused, it will be categorized for its severity, as follows:

Treatment options include burn creams and ointments, bandaging, and antibiotics for minor burns and skin grafts, plastic surgery, and intubation for severe burns.

Cars are at risk of catching on fire because they carry dangerous flammable fuel. Fuel tanks are designed to contain the fuel and keep it away from anything that could spark and set it alight. However, in a crash, the fuel tank can rupture and leak. If a heat source is added to the leaked fuel, a fire can erupt. In a violent crash, a fuel tank can even explode, spreading the fire and sending shrapnel flying. Newer electric vehicles are equipped with batteries that can also catch fire when punctured in a collision. There is a risk of a fire in any car crash, so you should always get out of the vehicle and get as far away as possible if you are able to.

Claim a Free Consultation With Our Indiana Personal Injury Lawyer