How Drunk Drivers Cause Damage and Injury on Indiana Roads

It is hard to believe that with all we know about the dangers of driving under the influence of alcohol, people are still drinking and driving. These dangerously irresponsible drivers are endangering themselves, their passengers, and other innocent drivers on Indiana roads every day. Our Indianapolis drunk driving accident attorney believes that the more you know about the dangers of drunk driving, the better able you will be to avoid becoming a victim of this risky and criminal behavior.

What Is Drunk Driving in Indiana?

In Indiana, as in every other state, you are considered over the legal limit when your blood alcohol concentration (BAC) reaches .08 percent. If you are 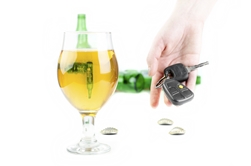 driving a commercial vehicle, the limit is .04 percent. Drivers under the age of 21 are breaking the law at .02 percent. There are more severe penalties if you are caught driving with a BAC of .15 percent or greater. According to the Centers for Disease Control and Prevention (CDC), a 160-pound man will exceed the legal limit by drinking four 12-ounce beers in a one-hour period. A smaller person will exceed the limit with fewer drinks. However, in Indiana, a driver may be convicted of driving under the influence without meeting the BAC level. If an officer determines that the driver’s ability was impaired by alcohol, he may issue a citation without a breathalyzer test.

How Big Is the Problem in Indiana?

There were 180 fatalities caused by drunk driving in Indiana in 2015, representing approximately 20 percent of all traffic fatalities that year. This number was down from the 205 alcohol-related traffic deaths in 2014 and continues a downward trend over the last five years. In 2014, there were 4,574 crashes in Indiana involving alcohol. The state’s DUI Task Force conducted 71 sobriety checkpoints in 2014, resulting in 719 arrests or citations.

Many of us know not to drive when we are drunk, but the problem is that not enough of us know when we have reached the legal limit. Some of us only avoid driving once we are at the point of staggering, slurring speech, and passing out. However, alcohol impairment happens at a much earlier stage and makes us just as dangerous behind the wheel. Some important information from the CDC includes the following effects of alcohol on driving for a 160-pound man drinking for one hour:

Shockingly, many people do not consider themselves too drunk to drive until they reach the .1 percent level and experience slurred speech, poor coordination, and slowed thinking.

What to Do If You Are Injured by a Drunk Driver

If you were the unfortunate victim of a person who chose to drive while intoxicated, you may think it’s enough that he or she is arrested and charged with the crime of Operating While Intoxicated (OWI). After all, the driver faces jail time, fines, and loss of his license. However, none of this will help you to recover from your injuries. To recover the financial settlement you will need to pay your medical bills and repair or replace your car, you may need an attorney experienced in drunk driving cases in Indiana.