SUVs and Trucks Pose Serious Dangers for the Environmentally Minded

With increasing concern about climate change and burning fossil fuels, many people are turning to fuel-efficient cars, such as electric or hybrid vehicles, or choosing to walk or ride a bike more often. While these actions might be commendable from an environmental-protection standpoint, they could be putting people 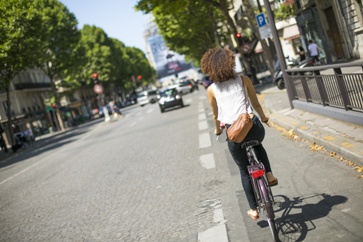 at an increased risk of serious injury or death in a vehicle crash. Even as sales of electric vehicles and bicycles rise, the market for big pickups and SUVs has not fallen. If you have chosen a more environmentally friendly form of transportation and you come up against a truck or SUV on the road, you will lose the battle. If the truck driver was careless or negligent in their actions, you have a right to hold them accountable. Our Indianapolis truck accident attorney can help.

As with any type of vehicle, certain driver behaviors increase the likelihood of a crash. However, when these negligent actions are taken by drivers of larger vehicles, they are more likely to lead to serious injuries and fatalities. In addition, there are certain behaviors that tend to be more typical of pickup truck and SUV drivers. Causes of catastrophic truck crashes include:

If you were in a crash with a pickup truck or SUV, you will need an experienced car accident attorney to determine whether the driver of the larger vehicle was at fault in causing the crash.

If drivers of small cars are more likely to be injured by a larger vehicle, where does that leave pedestrians and bicyclists? Unfortunately, they are at an even greater risk of serious injury and death. A recent study from the Insurance Institute for Highway Safety (IIHS) found that SUVs are more lethal to pedestrians than cars. The study found the following:

Many communities have added bicycle lanes by narrowing the existing streets. Because pickup trucks and SUVs are wider than other cars, they pose a bigger threat to cyclists using these lanes. If the driver does not slow down and pay close attention, the biker could be knocked over and seriously injured or killed.

Injuries Resulting From Crashes With SUVs

Whether you were in a small car, walking, or riding a bike when you were hit by a pickup or SUV, you would be lucky to survive. Common catastrophic injuries that can result from a crash like this include:

These kinds of injuries can be fatal, but even when they are not, the medical bills can be astronomical, and you should not have to pay them. Our car accident attorneys can help.