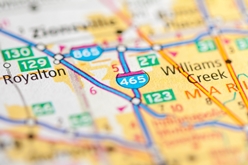 Anyone who lives in Indianapolis or has driven through the city like our Indianapolis personal injury attorney has is likely going to spend time traveling on I-465, one of the city's most well-known roadways. This 53-mile stretch of highway is also crisscrossed with a number of other main interstates and highways in Indiana, including I-70, I-74, I-65, I-865, and I-69.

Each day, I-465 sees over 200,000 cars that commute regularly to different parts of Indianapolis or to the city's suburbs. In short, you could say that I-465 serves as the "welcome mat" to downtown Indianapolis.

Factors Contributing to I-465 Accidents in Indianapolis

There are several theories as to what makes this particular Indianapolis interstate dangerous, ranging from high traffic numbers to confusing entrance and exit ramps.

1. High Traffic With Many Out-of-State Visitors

I-465 is a major artery for commercial trucks and businesses who are passing through Indiana or making in-state deliveries. The mix of out-of-state visitors not familiar with I-465 and Hoosiers who travel on the interstate every day can be a dangerous combination. Drivers often become less attentive to their surroundings when traveling familiar routes and may thus be slow in reacting to a motorist who is making a quick lane change because they're unfamiliar with I-465 and about to miss their exit.

I-465's unique shape includes corner-style turns that can prove dangerous if high speeds and inclement weather are sharing the road at the same time. In addition, there have been instances of broken-down vehicles or pedestrians who were involved in accidents in the corner areas of I-465. These accidents usually occur when a vehicle is traveling above the speed limit and doesn't react in time to the roadway obstruction or backed-up traffic.

3. Confusion Over Entrance and Exit Ramps

I-465 is plagued by several major entrance and exit ramps that can easily lead to merging accidents. Wrong way crashes can also be a problem when an intoxicated or disoriented driver causes a collision by trying to enter on an exit ramp.

In recent years, there have been multiple construction projects designed to widen and improve I-465's traffic flow and reduce the risk of dangerous traffic conditions. This has led to big improvements, but there are still stretches in need of innovation.

Many local residents maintain that the posted 55 mph speed limits on I-465 are simply too low and should be raised to the 65 mph limit seen on other freeways. While the public may feel this is a problem, the speeds are based on the configuration of the interstate and design to reduce collision risks. The desire to reach your destination a few minutes ahead of schedule isn't worth causing an accident.

Protecting Your Rights Following an Accident

If you've been injured in an I-465 auto accident, you may be eligible for compensation for the damages you’ve suffered. This includes: