Interstate 70 in Indiana Sees Many Driver-Caused Crashes Each Year

As a major state thoroughfare, Interstate 70 carries a lot of traffic and sees a lot of crashes each year in Indiana. I-70 runs from one side of the state to the other through 156 miles of farmland and cityscape. It intersects with I-465, I-65, and I-74 in Indianapolis, making it a popular highway for both daily commuting and long-distance trips. I-70 passes through Clay County, Vigo County, Putnam County, Morgan County, Hendricks County, Marion 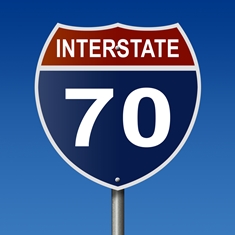 While I-70 makes it easier for many to travel and go to work, it can also be deadly. Interstate construction projects, tractor-trailers, reckless drivers, fatigued drivers, distracted drivers, and drunk drivers all make this major Indiana artery a danger to even the most careful drivers. Many of the 821 traffic deaths in Indiana in 2015 occurred somewhere along 1-70 as our Indianapolis car accident attorney explains. I-70 and other major highways are dangerous mostly because of the drivers on them.

According to the National Highway Traffic Safety Administration (NHTSA), the critical reason for a crash was assigned to the driver in 94 percent of all motor vehicle crashes nationwide in 2014. These reasons were broken down into four main categories, accounting for various driver behaviors and instances of inaction: recognition error, decision error, performance error, and non-performance error. We explain what these kinds of errors entail below.

In a recognition error, the driver fails to see or be aware of impending hazards or threats due to a lack of awareness of his surroundings. This can be caused by the following:

These kinds of driver error account for about 41 percent of all crashes attributed to driver error.

When a driver recognizes a dangerous situation but makes the wrong choice in response, he has committed a decision error. These kinds of accidents account for 33 percent of all driver-caused crashes:

Safe driving requires rational decision-making on the part of the driver. The predictability of your actions is what will keep other cars out of your path.

Whether due to the inexperience of a young driver, the inability of an older driver, or just carelessness, mishandling of a vehicle can lead to single-car crashes as well as crashes involving many cars. Some driving mistakes commonly made include:

These errors, simply put, are caused by the driver failing to take an action to avoid and accident or keep the car on the road. The most common non-performance error is falling asleep at the wheel.