Traffic congestion is a widespread problem, especially during rush hours when many people are traveling to and from work. Engineers and government officials alike are always evaluating roadways and trying to determine the best way to help traffic move safely and efficiently. Sometimes, it is determined to configure an intersection using a roundabout. A roundabout is a circular intersection that regulates traffic through yielding rather than a stop sign or light signal. This type of intersection has been constructed in the United States for more than a century, though their popularity decreased around the 1950s. Recently, roundabouts have enjoyed renewed popularity as some modern changes have been added. The city of Carmel has replaced 100 traffic lights with roundabouts over the last two decades, and the Indiana Department of Transportation encourages municipalities to consider a roundabout for any intersection improvement project. The debate continues, however, as to whether these intersections are really the best option in many situations.

How a Roadway Roundabout Works

A roundabout is a circular intersection where drivers travel in the same direction around a central island. A roundabout contains no stop signs or traffic lights, but depends on slower traffic speeds and yielding. As a driver approaches a roundabout, he yields to traffic already in the roundabout. When 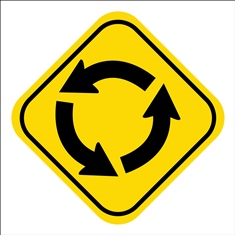 there is space, the driver enters the roundabout and continues around the circle until he reaches his desired exit point and can essentially travel unimpeded straight down that road.

Modern roundabouts differ from older versions of this type of intersection in that they contain:

A roundabout can be constructed in various sizes, and they are typically classified as mini, single-lane, or multi-lane.

Benefits of a Modern Roundabout

Proponents of the roundabout intersections offer many benefits to establishing this type of traffic flow. They claim a roundabout can fit nearly any size intersection and offers:

Roundabouts Can Cause Other Traffic Problems

Roundabouts do not reduce all risk from intersections. These problems and others can occur. Additionally, a roundabout cannot eliminate accidents completely. Accidents do still happen even with the safety features of a circular intersection.

There is no way to eliminate car accidents. Drivers, road conditions, and traffic congestion will continually change and create some risks. The low speeds that roundabouts create are effective at reducing the severity of injuries, though there are accidents that commonly occur in roundabouts that can cause injury to drivers and passengers. According to the Insurance Institute for Highway Safety (IIHS), roundabout crashes most often include:

These types of accidents can result in property damage, as well as injuries large and small that can affect a victim’s life for years to come. If you or someone you love has suffered injuries in an accident in a roundabout, you may be eligible to file a claim. Contact the experienced car accident attorneys at Keller & Keller at 1-800-253-5537 to learn more about your rights.