Crossover and/or head-on car accidents are one of the more rare collisions that occur on Indiana’s interstates, and while that’s good news, it also remains a fact that they still account for the most serious types of accidents, with fatalities and traumatic injuries being the common after-effect.

In an attempt to further curb the number of crossover accidents on our interstates, the Indiana Department of Transportation (INDOT) is installing a new run of wire cable barriers along sections of I-70 and I-65, two of Indiana’s heavily traveled roadways.

It’s believed by many that the advantages offered by cable barriers make them a worthwhile investment for the State, with statistics showing that cable barriers have been proven to decrease the instance of crossover fatality by as much as 90%. In addition to being cost-effective, a cable barrier system is designed to absorb impact energy, making it more forgiving than impact with a concrete median or steel railing system.

According to INDOT, Indiana has already installed nearly 400 miles of cable barrier throughout Indiana. Hoosiers are more likely to see cable barrier in the middle of medians that are between 30 and 60 feet wide--these medians are believed to have the most potential for a deadly or traumatic crossover accident.

What causes a cross-over accident in Indiana?

Throughout much of Indiana, grassy medians are often the only barrier used to divide opposite lanes of travel, each varying in width, depth, and the presence of trees or other natural growth. If a car enters the median at interstate speeds, the result is often a loss of control and an extremely high potential for a crash involving one or multiple vehicles.

A diagram example of a crossover accident: 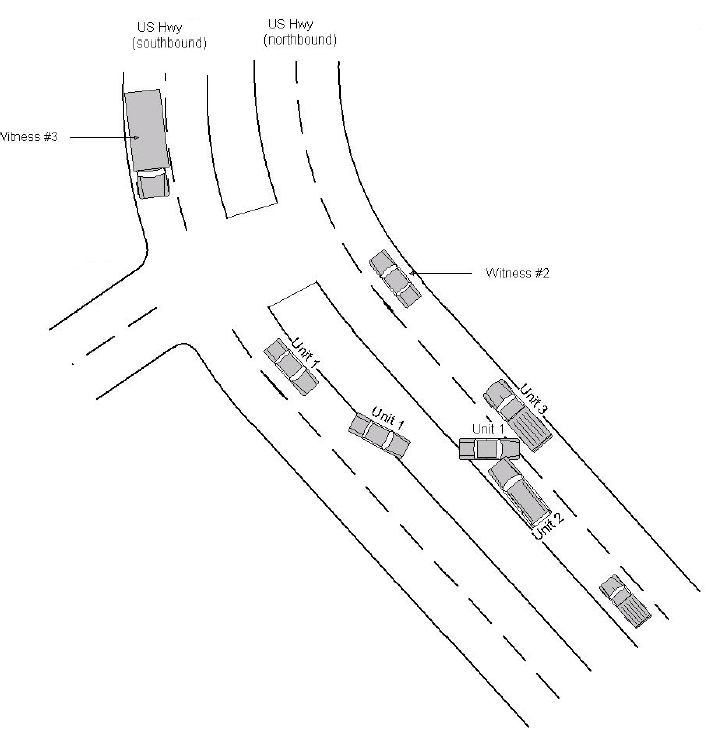 Over the years, our office has investigated multiple crossover accidents on behalf of former clients, and in these specific instances we've found one or more of the following factors to be a contributing or sole cause of the crash:

The at-fault driver was texting (not paying attention), crossed into the median, lost control of the car, and went into the opposing lanes of oncoming traffic.

Rain, snow, wind, and ice have all been factors in previous cross-over accident cases we’ve handled. In most instances, the driver that crossed over was driving too fast for conditions.

Under the Influence of Alcohol or Drugs

Anytime a car leaves the roadway there’s always the potential for the driver to over-correct. We have seen multiple instances of a vehicle’s tires going off the road to the right, and the driver then over-correcting back to the left, resulting in them crossing into the interstate median and then oncoming traffic.

The causes listed above don't account for all the possible reasons crossover accidents occur, however, they do represent high risk factors associated with this particular accident type.

Were You Injured in an Indianapolis Crossover Accident?

Because crossover accidents typically cause serious injury, the majority of victims involved in these collisions can often benefit from the assistance of an experienced personal injury law firm. There are a few reasons to consider consulting with an attorney after a crossover accident:

1.) The level of injury (or in some cases death) will be a reason for the insurance company to become involved as quickly as possible in an attempt to limit their liability, i.e., work to pay the victims as little as possible. Having a law firm protect your interests can help to ensure you receive full compensation for your injuries.

2.) It's not uncommon for multiple vehicles to be involved in a crossover accident. When more than one car or truck is involved, an immediate investigation should be performed on your behalf. (The insurance company will perform an investigation, so having an attorney do the same on your behalf helps to even the playing field.)

3.) It's not uncommon for crossover accidents to involve semi-trucks or other commercial vehicles. Often times the policies written for commercial vehicles will equal or exceed $1 Million dollars. Having an attorney investigate the at-fault driver will help to ensure all applicable policies are accounted for with regard to compensation.