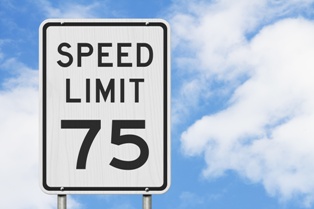 It's no surprise that speed is a common factor in many New Mexico car accidents. Our lawyers often see "excessive speed" listed as a primary cause or contributing factor on our clients' police reports. And with higher speeds come more severe injuries, but the question some might ask is whether or not New Mexico's posted speed limits are causing more accidents.

Currently, New Mexico's 75 mph speed limits on certain freeways and interstates makes us one of only sixteen states that allow drivers to travel at this rate of speed. We are still not one of the fastest states, however. Other states have posted speed limits of 80 mph on rural interstates and Texas has the highest posted speed limit in the country—85 mph on one stretch of state highway 130.

It's not easy to determine whether or not high speed limits translate into more crashes. If we look at the number of crashes in an area of the state that posts 75 mph limits, it's likely there will be fewer crashes than on the high traffic interstates with lower speed limits due to the simple fact that there are fewer vehicles on the 75 mph roads. However, does this tell the whole story?

Some studies show that when speed limits are raised, crash rates don’t necessarily increase significantly. The reason? Drivers are not likely to exceed their own personal comfort level with regard to how fast they drive, no matter what speed limit is posted.

However, other studies have shown that the number of fatal crashes is linked to speed limit. For example, in a report published by the Insurance Institute for Highway Safety, one statistic points to the fact that when Congress established a nationwide maximum speed limit of 55 mph, deaths attributed to automobile accidents dropped by 16 percent. And specific to New Mexico is a report that saw fatal crashes increase throughout the state in 1987, when we became the first state to revert back to a 65 mph speed limit on rural highways.

Were You Injured in a New Mexico Speed-Related Accident? We Can Help

If you were injured in an accident that was caused by excessive speed, we want to help. Our office is based in downtown Albuquerque and our attorneys travel throughout the state to handle cases caused by speeding. We offer everyone in the state of New Mexico our Zero Fee Guarantee. This means that you'll never be charged for a consultation and we don't receive any payment for our services until you win your case.

If you want to speak to one of our attorneys immediately, you can start a chat, call us at 800-253-5537, or if you prefer to write us, fill out our free contact form. We will be in touch soon!

Complete the short form next and we'll be in touch within 12 hours.
We've helped injured people and their families for over 75 years.