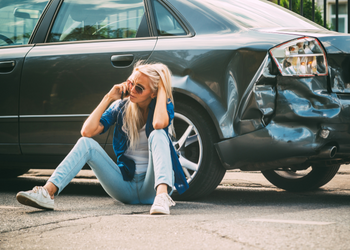 Car crashes happen out of nowhere. You may be on your way to work or running a few quick errands when you are suddenly T-boned or rear-ended by a careless driver. While you certainly felt the impact of the collision, the shock of the crash may temporarily mask any pain or discomfort you feel. As the adrenaline kicks in, you may even feel energized and angry, rather than feeling the physical effects of the impact. The burst of energy could carry you through the aftermath of the accident—dealing with the other driver, the police, the tow truck, and even a responding EMT or doctor in the emergency room. You may report that you are not injured and that you feel fine. That could all change when you wake up the next day, however.

Be Aware of These Delayed Symptoms

Symptoms of several serious injuries could be hidden for days following a car crash as you get over the shock and allow yourself to relax and process what happened. One common car accident injury that may not be symptomatic immediately is a concussion. A concussion is a brain injury caused by either a direct blow to the head or by a violent jolt to the head or body. In a car accident, even a low-speed impact can shake the body enough to cause a concussion, which can affect cognitive functioning—although usually only temporarily.

Some symptoms of a concussion that may not emerge until several days after a crash include the following:

It is always a good idea to be assessed for a concussion immediately following a crash, even if you did not hit your head and feel fine. The earlier a concussion is diagnosed, the better able doctors will be to treat it. Even if you are given the all-clear after the crash, if you develop several of these symptoms over the following days, see a doctor to be reevaluated for a concussion.

Another common car accident injury is a soft tissue injury such as whiplash. Soft tissue injuries often take several days to become symptomatic because it takes time for swelling and stiffness to develop following a strain on muscles and ligaments.

Some signs that you may have experienced a soft tissue injury include the following:

Soft tissue injuries can be difficult to diagnose because they do not appear on x-rays, but a doctor will assess your range of motion and evaluate your symptoms in order to determine if you have whiplash or another injury.

Other signs of serious injury include the following:

After a car accident, you probably want to get on with your life as quickly as possible, but ignoring the symptoms of a serious injury is never a good idea.