You would do anything to keep your children safe, but you know you can’t lock them away forever to protect them. There comes a point when you have to trust that other people will be responsible and not endanger your children with their reckless actions. A perfect example of a time when you must rely on strangers to watch out for your children is on the 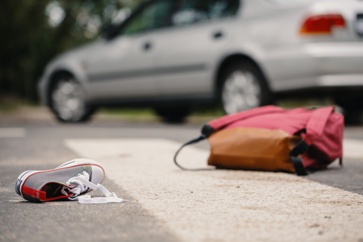 road. When drivers engage in negligent behaviors such as speeding or intoxication, your children are at risk—whether they are buckled in a car seat or walking to school. According to the Centers for Disease Control and Prevention (CDC), 20 percent of children under the age of 15 who are killed in traffic accidents each year are pedestrians. This means that these young lives were tragically cut short in crosswalks, parking lots, driveways, and school zones by negligent drivers. Our Indianapolis car accident attorney explains further.

How Children Are Injured and Killed by Negligent Drivers in Indiana

Despite your own efforts—and safety measures taken by schools and communities—children are killed or injured by cars every day in the U.S. Crosswalks, school safety zones, and even crossing guards are no match for reckless drivers. Negligent driver actions that often result in children being hit include:

Drivers have a duty to look out for pedestrians—even those who might not be where they are supposed to be. Children are especially vulnerable and cannot be expected to be responsible for their own safety. If a driver hits a child—no matter what the circumstances are—it is likely that they can be held responsible for the harm they cause.

But How Does a Child File an Injury Claim?

Clearly, a child cannot file an injury claim on their own, but a parent or guardian can file on their behalf. If a child is injured by a negligent driver, there are a few things the parent can do immediately after the accident to protect a future claim for damages.

It is important to understand that filing an injury claim is not the same as filing a lawsuit. You should not be worried about the possibility that your child will have to take the stand in court or anything like that. In most cases, your attorney can negotiate a fair settlement with the insurance company without inconveniencing you or your child at all. If it is necessary to file a lawsuit, the evidence that has been gathered will be used to prove to a judge that your child is owed more than has been offered by the insurance company. Your child will not have to testify.