Indiana Trucks Must Be Maintained According to State and Federal Standards

As a motorist on Indiana highways, you want assurance that the semi-trucks sharing the road with you are in good condition and safe to drive. The federal government agrees. That's why the Federal Motor Carrier Safety Administration (FMCSA) regulates the maintenance and inspection of all commercial trucks that cross state lines. The state of Indiana enforces similar laws with trucks that don't travel between states. When a truck isn't maintained according to these state and federal regulations and is involved in an accident, both the trucker and his employer may be held accountable for any damages or injuries that result from the accident according to our Indianapolis truck accident attorney. 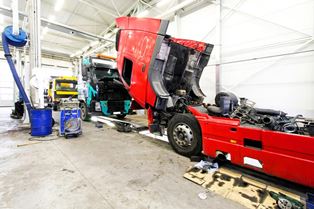 Interstate vs. Intrastate Trucking in Indiana

FMCSA regulations, known as the Federal Motor Carrier Safety Regulations (FMCSR), only apply to trucks engaged in interstate commerce, but many states, including Indiana, adopted significant portions of these regulations for commercial trucks that operate only within state borders.

Intrastate commerce, on the other hand, is a truck trade that never crosses Indiana borders. If a truck conducting intrastate commerce is involved in an accident, it would fall under the laws of the state of Indiana. However, as Indiana has adopted most of FMSCR as state law, the same requirements apply.

Requirements for the Maintenance of Trucks

Along with regulating who is legally qualified to drive a commercial truck, FMCSR and Indiana state law also regulate safety protocols for all trucks. Specifically, drivers and their employers are required to maintain vehicles in good working order, maintain pre-trip and post-trip driver inspection reports, inspect vehicles periodically, and keep all records of repairs and inspections.

Pre-trip inspections include ensuring the following parts are in good working order:

Additionally, a commercial vehicle must undergo a thorough inspection every 12 months and the inspection report must be kept in the vehicle.

How Poor Maintenance Leads to Crashes

When trucking companies and drivers fail in their duties to maintain safe trucks, they put other motorists at risk. While truck crashes are caused by many factors, including truck driver impairment or error and unsafe road conditions, the leading cause of all truck crashes is brake problems. According to FMCSA, 29 percent of all truck crashes with a fatality or injury are caused at least in part by brake failure. Tire problems are the next leading cause of vehicle failure crashes, contributing to 6 percent of fatal and injury crashes.

When a truck crash occurs, an experienced attorney will know to investigate all possible causes of the crash. If vehicle failure of some kind is suspected, the attorney will request copies of:

As drivers are required by both Indiana and FMCSR to have this documentation, if any of it is missing, the driver could be held liable. Likewise, a company that breaches its duty to maintain safe vehicles can be held liable for putting a defective vehicle on the road.