When First Responders Cause Accidents, They Can Be Held Liable—But Only in Limited Situations

We are all grateful for the life-saving work first responders do, and we understand that they must be able to get to emergencies quickly in order to save those lives. However, our injury lawyer says, there is no doubt that emergency vehicles speeding through city streets are also very dangerous to other drivers and pedestrians who are going about their day.

While first responders and the municipality for which they work are generally immune from lawsuits if someone is injured or killed in a vehicle accident, there are situations in which a personal injury lawsuit might be allowed. Our Indianapolis auto accident attorney takes a look at the laws protecting first responders, how often accidents happen, and when a lawsuit might be an option.

As licensed drivers in Indiana, we all have a responsibility to protect emergency workers. First responders and utility workers on the side of the road are at risk of being hit by cars speeding by as they perform essential duties. That is why, under Indiana law, you are required to either slow down or move over when passing by 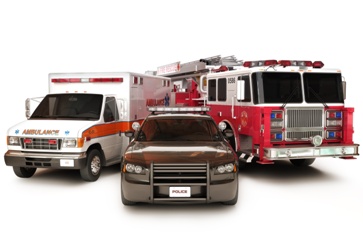 on a city street or highway. As soon as you see flashing lights, you must reduce your speed and change lanes if you are on a multi-lane road or move as far over in your lane as you can on a single-lane road.

If you are unable to put a lane between yourself and the emergency vehicle, you are required to reduce your speed to at least 10 miles per hour less than the posted speed limit. If you fail to move over and/or slow down, and you hit an emergency vehicle, you will be fined and could lose your license for up to two years.

If a worker is injured or killed, you could wind up in prison. Indiana’s move-over law applies to the following kinds of vehicles:

If you are injured in a crash with an emergency or utility vehicle that is pulled off the road, you would not have grounds to file a personal injury lawsuit as you would most likely be considered to be at fault in the crash.

How Often Do Indianapolis Emergency Vehicles Cause Crashes?

Every licensed driver should know what to do when an emergency vehicle is in motion with its lights and siren on. Obviously, you are required to move over so they can pass. This could mean changing lanes and slowing down or pulling over next to the curb and stopping, depending on the kind of road you are on. If an emergency vehicle is approaching an intersection with flashing lights and sirens, you should move over if possible to allow them room to cross the intersection. Otherwise, stay where you are and allow them to figure out a path through.

That covers what you should do, but what responsibilities does the driver of the emergency vehicle have to keep other drivers and pedestrians safe? The fact is, flashing lights and screeching sirens are not a license to endanger other drivers. What good does it do to get to an emergency to save lives if you are endangering more lives on the way there? Unfortunately, first responders do sometimes cause serious accidents. According to the National Safety Council, 171 people died in crashes with emergency vehicles in 2019.

A breakdown of the data reveals the following:

The data does not reveal who was at fault in each of the crashes—was it the first responder or the other driver? In most cases, even if the driver who was injured or killed did not cause the crash, the driver of the emergency vehicle would not be liable.

What Are the Exceptions to the Immunity Rules in Indiana?

If an individual driver acts in a negligent manner with reckless disregard for the safety of others—even if they are on their way to an emergency—they can be held accountable if they cause a crash. Examples of negligent actions could include:

In order to establish grounds for a lawsuit, the victim or their family would have to be able to provide evidence of the driver’s negligence. Evidence might include eyewitness testimony, statements from coworkers, results of a drug or alcohol test, personnel records, and more.

Let Keller & Keller Determine Whether You Have a Case

If you were seriously injured or a loved one was killed when an emergency vehicle crashed into you, it’s possible that you have a claim for damages against the driver or the municipality that employs them. However, this is not something you can determine on your own. You need an experienced legal team to examine the case and decide if there is enough evidence of the first responder’s negligence in causing the crash.

We are all grateful for the work EMTs, police officers, and firefighters do for our community, but that doesn’t mean that a bad apple should not be held accountable when their recklessness causes a serious crash. Contact our accident team in Indianapolis to find out if we can help you get the compensation you deserve after a crash with an emergency vehicle.