Before we start, it’s important that our Indianapolis car accident attorney clarifies: Many people often refer to Google Maps in a general sense, but it’s easier to think of Google Maps as one product, while some of its many features like Street View, Earth, Terrain, Traffic, and Bicycling are specific settings that allow you to view Google Maps in different formats, as well as access unique information and data that can supplement a personal injury investigation.

(If you’re not a regular user of Google maps, this fantastic tutorial video can help you familiarize yourself with its capabilities and features.)

Can Google Street View Help With Your Injury Case?

The amount of fact-checking and research a car accident lawyer can accomplish with Google Street View is astonishing, and better yet, it’s absolutely FREE.

Our law office has long used Google Street View as part of the initial, multi-step investigation for clients injured in car accidents. It’s especially helpful when the police report is not yet available, and the majority of times it reveals evidence that may have otherwise gone unnoticed.

However, before we look at the specific ways Google Street View can help a car accident case, let’s discuss the most common problem it addresses during an initial consultation: faulty memories.

Having consulted with tens of thousands of clients, we have repeatedly witnessed the various psychological injuries a traumatic automobile accident can inflict on a person. In addition to side-effects like PTSD, we often find that a person’s sense of timing and memory of the accident have been drastically altered.

Specifically, it’s not uncommon for a person to be left with a feeling of time having sped up (“It happened so fast!”) or come to a crawl (Everything seemed to happen in slow-motion!). This type of illusionary response from the brain can potentially signal that a person’s memory of the accident is fragmented (I’m not sure, but I think there was a turn light at that intersection?).

So how can Google Street View help?

Google Street View helps to rebuild the immediate surroundings of the accident scene, allowing the attorney to better understand the potential cause and provide the client with a much more accurate depiction of the scene. Often, we are able to pull these images up during the initial consultation and view them together with the client.

An attorney paying close attention to a client’s accident story can identify subtle clues, leading them to believe there is more to the story than what the client realizes.

For example, we met with a young woman who suffered a serious injury after another driver failed to yield and pulled into her path from a two-way stop. We spoke for nearly an hour, and it wasn’t until the end of the consultation, when she made an offhand comment about the defendant approaching her car and saying, “I didn’t see you!” When our attorney asked her why she thought he made this comment, she said, “It happened so fast, I don’t really know.” She simply assumed he wasn’t paying attention.

In this instance the police report was already available, but it failed to offer any additional clues as to why the defendant wouldn’t have seen her, so we performed a quick Google Street View search of the intersection to see if it could offer additional information.

After rotating the picture and traveling up and down the street with the click of the mouse, we were able to quickly note evidence of a potential obstruction issue caused by overgrown trees and bushes, leading to potential negligence on the part of the homeowner.

Now, instead of only having the defendant’s auto policy to pursue, we had two potential sources of recovery for a client that had tens of thousands in medical bills.

The trees and shrubbery on the left-hand side of this Street View picture* illustrate an example of what may be considered a potential obstruction.

Vehicles attempting to cross the road on which the pictured truck is traveling have a stop sign in both directions. Drivers coming from the left-hand side of the picture are forced to yield at a stop sign that sits several feet back from the intersection. They are immediately faced with overgrown trees and brush obstructing the view to their immediate left, making it difficult to see oncoming traffic that does NOT have a stop sign.

(*This picture was used as an example of a potential obstruction. It is NOT the intersection from an actual case, and the landscape may have changed since this image was taken.)

In addition to obstruction issues like the one above, Google Street View is also a wonderful resource for confirming traffic light configurations.

On occasion, a client will mistakenly believe they had a green turn arrow that gave them the right of way through an intersection, however, after a quick check of Google Street View, we have been able to confirm that the light does not have a green turn arrow, and only a solid green. (This is especially common when a client is traveling in an area unfamiliar to them.)

In the past, we have investigated cases in which our attorneys used Google Street View in an attempt to verify prior instances of downed or stolen signage. And while this problem doesn’t necessarily signal a problem with the client’s memory of the accident, evidence of downed signage could mean the difference between having a potentially valuable case and having no case at all.

In one particular case, a client was t-boned after entering an intersection that had been found to be missing a stop sign. Had the sign not been removed by vandals, our client would have likely seen the sign and not immediately entered the intersection.

Critical to this case was our ability to show that the proper authorities had been put on notice that the sign was down and had a reasonable amount of time to replace it. Not only did we learn that there had been recent reports that the intersection was missing its stop sign, we also learned it had been plagued by acts of criminal mischief (stealing of stop signs) in the past. In addition, we conducted a quick Street View search of the area to look for any prior images that showed a missing stop sign.

Another valuable use of Google maps is its ability to provide aerial shots of roadway configurations. This feature is available to help conduct an initial inspection for any potential design defects the attorney believes may require a tort claim notice. (Our office has filed a tort on more than one occasion after viewing an aerial map of a roadway that led us to believe there was design negligence.)

It’s important to note that you’ll want to use the Earth feature of Google maps when looking at aerial views, as this will give you the most detail. Otherwise, you’ll largely be unable to distinguish photographic evidence.

A view of downtown Indianapolis without Google Earth turned on: 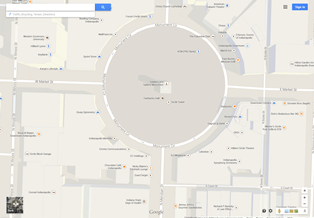 The same view after clicking the Google Earth box in the lower left-hand corner of the above map screen: 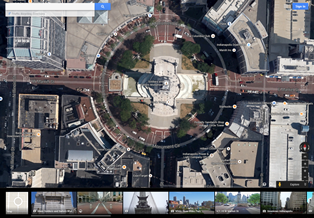 Timing of the Accident

In addition to visual evidence, another critical role Google Maps plays is its ability to secure the timing of the sequence of events that led up to the accident. For instance, we’ve used Google Maps while fact-checking a defendant about whether or not they were speeding. And how were we able to do that with Maps?

An example of such a case might include a client we believe was injured as a result of a defendant speeding because they were late for work. During a deposition of the defendant we might look to supplement any possible witness testimony of their speeding with a Google Map document that highlights three facts:

1) The route traditionally taken to work by the defendant,
2) The number of miles Google Maps stated was between the defendant’s home and their place of employment, and
3) The estimated time Google Maps suggested it would take to travel that route.

For the purposes of this example, let's assume our attorney compared the printout to the police report’s time of accident (7:50 a.m.) as well as the location of the accident (12 miles away from their place of employment). This would then allow us to make a reasonable assumption that the defendant, who was supposed to be at work at 8:00 a.m., was possibly speeding in an attempt to get there as quickly as possible.

Again, this is merely an example of one type of investigation our office can and has conducted with Google Street View and Maps.

A) Google Maps is not updated in real-time, nor are its main features like Street View.

This means that many of the images you see on Maps and/or Street View could have possibly changed. Your attorney should always investigate the physical scene as quickly as possible to confirm the evidence depicted on Google Maps or Street View.

B) You CAN go back in time!

Unfortunately, some clients may delay contacting an attorney for an extremely long time. Depending on how long, and what that statute of limitations is in your case, it’s possible that the attorney can use Google Street View to re-visit the scene as it looked years prior. (Currently, you can go back 6 years on Street View.)

C) Google Street View is an amazing tool with robust functionality, but there are areas that are not available for view. Most often these areas are rural locations, or neighborhoods in outlying rural or suburban areas.

D) Perhaps most important, if Google Street View and Maps is used at any time to investigate you accident case, it’s a mere reference point, and could never be used on its own to win a case.

Put simply, while it’s a source of interesting data, it is only one of several potential steps and pieces of evidence an attorney will likely need to help solidify the liability in your accident case.

Last, we wanted to leave you with a very unlikely, yet fun coincidence we noticed while looking at the Street View version of Keller & Keller’s office in Indianapolis.

As mentioned above, Street View allows you to travel back in time 6 years and view an address at one point in every year up until the most recent version provided by Google. On the 2011 version we noticed a Google car happened to snap a Street View location that spots a Keller & Keller bus getting ready to pass in front of our office.

What are the odds?!