Driver fatigue and/or drowsy driving can be factors that prove just as dangerous as those related to drinking and driving. The cumulative effects of driver fatigue, our Indianapolis car accident attorney details, are what ultimately cause a person to be less attentive, exhibit erratic driving patterns, and in worst-case scenarios, fall asleep behind the wheel. Statistics on driver fatigue indicate that the problem is one that should be taken seriously by all drivers, especially those who regularly sleep less than seven hours a night.

In a 2016 study, the AAA Foundation for Traffic Safety makes a direct connection for the first time between sleep deprivation and motor vehicle 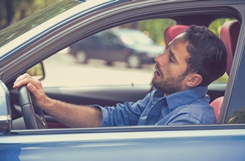 The study also makes a direct correlation between the amount of sleep a driver gets and the equivalent in blood alcohol content (BAC). They found that:

While the risks of driving while fatigued have long been known, this new study provides concrete details on just how much your risk of crashing is affected by the amount of sleep you get.

How Big Is the Problem?

It is difficult if not impossible to know exactly how many crashes involve a drowsy driver, as there is no hard evidence that can be collected at the scene. Data on drowsy driving crashes comes from police observations and admissions from drivers, so many of these crashes go unreported. However, the following statistics take this into account in their estimations of just how big the problem is:

Perhaps the most tragic thing about drowsy driving accidents is that they are absolutely and completely preventable. If you are feeling sleepy while behind the wheel, it is vital that you understand that you could be a danger to yourself as well as others on the road. You are an impaired driver and your chances of causing a crash have increased significantly!

While many people try to stay awake with tactics such as turning up the music, turning off the heater, or rolling down a window, these methods have not been proven to be effective. There are several ways that you can help prevent drowsy driving:

For some people, lack of sleep is a simple reality of their lives. If you believe you are suffering from a sleep disorder, or are unable to stay asleep during the nighttime hours, seek a consultation with your doctor to address the matter and understand that you are taking risks when you drive.

Signs a Person Is Driving Drowsy or Fatigued

The most dangerous thing about drowsy driving is that people often aren’t even aware that they are fatigued. It is important to be alert to signs that it is time to take a break, including the following:

What should you do if you are getting sleepy while driving? Safety experts recommend pulling over immediately and stopping for the night. If you are unable to stop for a long period of time, pull over in a safe place for a short nap followed by a cup of coffee. Absolutely do not continue driving until you have rested.