No one expects to be harmed, attacked, or injured while they are out in the world. As humans, we take safety precautions especially in places that are inherently more dangerous, like back alleys, inner city streets and dark parking lots. We may be a little less careful in places where we have an expectation of safety, such as hotel hallways, move theater bathrooms, or in our own apartment. This is because we expect that the business owner or landlord took reasonable precautions on behalf of our safety. But, what happens when the business owner or landlord is negligent and you are put in danger?

Unmonitored areas, broken locks, doors and gates that don’t close properly, poorly lit areas, and inadequate security are all invitations for criminals to commit robberies, physical assaults, sexual assaults, rape, or other violent crimes. When someone is attacked in a place where they had a reasonable expectation to feel safe, he or she may have a claim for negligent security against the property owner.

In many states, laws differ on when and if a landowner may be held liable for negligent or inadequate security. Property owners have a legal duty to provide reasonably safe premises for customers and to the public. Indiana law requires landowners to take steps to prevent reasonably foreseeable acts of third parties when they know or should have known that criminal activity has occurred on the premises.

Examples of Negligent Security in Indiana

“Reasonable foreseeability” is a vague standard. So, what can a resident, guest, or visitor reasonably expect from a property owner in regards to their safety and protection?

There are many safety measures that business owners can take to protect their patrons. Some of these are simple and inexpensive, and some involve advanced technology or trained manpower, but, no matter what the security measure is, the property owner has a responsibility to ensure that the system of security is function and capable of providing protection.

Some examples of security lapses that could lead to a negligent security claim include:

Any of these issues could lead to an attack that could have been prevented with adequate security. If you were assaulted or a loved one was killed in an office building, hotel, apartment complex, parking garage, school, store, restaurant, or any other premises not owned by you, you could have a claim for negligent security against the property owner. In order to have a strong case, however, you will have to prove that two factors existed.

A property owner cannot be expected to predict and prevent every possible act of violence. Some crimes are simply random or completely unexpected for a particular location. In order to prove negligent liability, a victim must show that the following are true:

1. The Crime Was Foreseeable

In the case Vertucci v. NHP Management Co., a tenant sued a landlord for injuries sustained when she was sexually assaulted at apartment complex swimming pool by a non-resident. In this case, the lease agreement contained a provision that security was solely for the protection of the landlord’s property and not of its tenants. However, the issue was whether the landlord assumed the duty to protect his tenants by providing ID cards to tenants. The court found the landlord to be liable because he assumed a duty by providing resident only ID cards to tenants. When a party has assumed a duty, he must exercise reasonable care and skill in discharging that duty. Ultimately, liability to protect a tenant from criminal activity may be imposed upon a landlord who voluntarily undertakes to provide security measures, but does so negligently.

The victim must show that the crime occurred because of the property owner’s negligence. This is not an invitation to present precautions that could have been taken to prevent the crime, but rather it is a requirement to show that the measures that were taken malfunctioned or were inadequate. For example, if a perfectly good alarm system is disabled by a criminal, the property owner will probably not be held liable, but if an entryway lock was broken and the landlord knew about it and didn’t repair it, then liability exists.

In order to prove that these conditions exist, a victim will need the help of an experienced negligent security attorney to gather evidence, examine police reports, interview witnesses, and analyze crime data from the area.

In Indiana, Keller & Keller Is Here For You

Negligent Security is a specialized area of law that requires an attorney with experience, resources and skill. With offices in Indianapolis, Terre Haute, and Granger, Keller & Keller can provide representation in your negligent security case anywhere in Indiana. Our experienced attorneys know how to gather the evidence needed to prove your claim, and they will go above and beyond to get you the settlement you deserve. Call our office at 800-253-5537 to schedule a free, no obligation review of your case. You don’t pay until you win, so you have nothing to lose. Call now!

6 Factors That Make Your Case Stronger 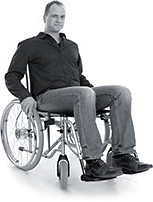 1 Tell Us Your Story

We deal with the insurance company. We handle your entire case.