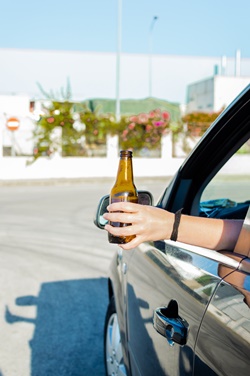 As if the inexperience and risk-taking tendencies of teenage drivers are not bad enough, when you add in the possibility that the young driver might be impaired by alcohol, you have an extremely dangerous situation for other drivers on the road. We should all do our part to prevent teenagers from drinking and driving. However, it’s important to know that if you are injured in a crash with a drunk teen, you can—and should—hold them accountable for their actions with the help of an experienced Indiana car accident attorney.

Indiana Has a Zero-Tolerance Policy for Underage Drunk Drivers

Drunk driving, known as OWI (operating while intoxicated), is prohibited in Indiana—as it is everywhere—but it is not illegal for adults over the age of 21 to have some amount of alcohol in their system when operating a vehicle. The legal limit for blood alcohol content (BAC) for drivers 21 and older in Indiana is .08, which equates to several drinks over the course of an evening, depending on the weight of the drinker. However, for a driver under the age of 21 who is not legally permitted to drink alcohol, even a trace amount of alcohol in the bloodstream will result in an arrest for OWI. Officially, this level is .02 percent, which is one drink or less for most people.

Why Teen Drivers and Alcohol Are Such a Bad Combination

Obviously, anyone whose faculties are impaired by alcohol is a danger behind the wheel. However, teens are a particular threat because of their overall lack of driving experience. That is why even a small amount of alcohol can affect their driving. According to the Centers for Disease Control and Prevention (CDC), one in ten teens in high school drinks and drives, and drivers between the ages of 16 and 20 are 17 times more likely to die in a car crash when they have a BAC of .08 percent than when they have not been drinking. While this should be a major concern to parents of teens, it is also a concern to all of us who might be sharing the road with a drunk teenage driver. Young drunk drivers are a threat because of their:

If you are in an accident, and it’s clear that the other driver is a teen who has been drinking, the police will certainly issue a ticket and make their life very difficult. However, it will be up to you to hold the teen’s parents and insurance company liable for the medical and other expenses you are forced to endure because of their actions.

There is No Excuse for Drunk Driving

You might have teenagers yourself or just remember being an irresponsible teen. However, that is no reason to excuse a drunk teenage driver’s actions. If they were driving their parents’ car, there will be insurance to cover their losses. A lawyer can make sure you get what you are owed. If they were driving their own car and do not have insurance—or have insufficient insurance—you will need a lawyer to help them seek other forms of compensation.