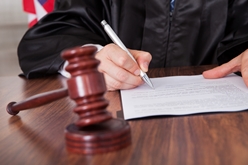 A recent Ohio Supreme Court ruling regarding a tragic fatal crash in Indiana in 2008 has raised the issue of whether Ohio's so-called "long-arm statute" provides Ohio courts with the jurisdiction to make a claim alleging economic loss by an Ohio company when its driver was involved in an accident with an Indiana driver operating on behalf of an Indiana company in Indiana.

Also at issue was whether the Ohio court, in exercising its jurisdiction, violated the rights of the Indiana company, its driver, and its insurance company.

The accident occurred on Monday, November 17, 2008, and left one driver dead. According to troopers with the Indiana State Police, Leavenworth resident and trucker Craig M. Farler, 40, was behind the wheel of a semi with a blue cab on behalf of Fraley Trucking as it traveled along U.S. Route 231 in Spencer County. As he approached Dale, around 1:25 PM, the trucker observed a 1989 Dodge truck cross the double yellow line and veer into his lane.

Investigators say the trucker was unable to avoid a collision with the vehicle, belonging to J&R Equipment and Storing, and operated by Wheatland resident Timothy J. Oeding, 38. The two vehicles collided head-to-head and indications suggest that Mr. Oeding died on impact.

Paramedics responded to the scene and transported the unidentified trucker to Jasper Memorial Hospital for treatment of a leg break and other injuries. He was later transferred to the University of Louisville Hospital in Kentucky for further treatment, including surgery.

Authorities do not believe that either party was impaired at the time of the accident. In 2014, large trucks were involved in 14,595 accidents in Indiana, according to the Indiana Criminal Justice Institute.

The case Goes to the Ohio Supreme Court

In the course of its investigation, the insurance provider for J&R, Auto-Owners, placed an investigative hold on the Fraley truck. In response, Fraley filed suit against Auto-Owners, the Estate of Mr. Oeding, and J&R in Butler County, Ohio.

This prompted the defendants to file a motion to dismiss for lack of jurisdiction. Auto-Owners subsequently settled all claims, with the exception of Fraley Trucking's economic loss, before a ruling was made. Meanwhile, the trial court found that it could not assert personal jurisdiction over a defendant from another state, merely because its insurance company did business in the state of the injured party and granted the motion to dismiss.

This barred Fraley from pursuing a direct action for damages against Auto-Owners, since he had not obtained a judgment against the insureds. When the 12th District Court of Appeals reversed the personal jurisdiction ruling, the matter was passed to the Supreme Court of Ohio. In February of 2014, the Supreme Court ruled to reinstate the trial court's decision, meaning that Fraley Trucking could not sue for damages.