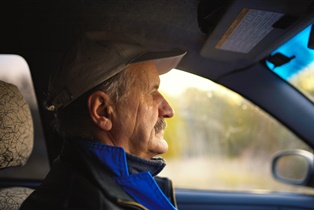 There is no quicker way to take away an older person’s sense of freedom and independence than by taking away her ability to drive a car. Going places on her own schedule, getting the things she needs when she needs them, and participating in the activities she loves are all made much easier when she is able to drive herself. However, older people often experience physical and cognitive declines that can affect their ability to drive safely. When this happens, they risk not only injuring themselves, but injuring others on the road. We discuss the limitations older drivers face and how to know when it’s time to give up the keys.

As the overall population of the United States ages, more and more older drivers are on the road. While older drivers tend to avoid busy rush hour driving and stick to local roads, they are driving more miles than ever before, increasing the chances that they will be involved in an accident. Despite having many years of driving experience, people over the age of 70 tend to make common mistakes due to the natural effects of aging on the body. According to the National Institute on Aging, some declines experienced by older people that can affect their ability to drive safely include:

As these conditions often develop gradually, many older drivers aren’t aware they have a problem until they are actually involved in an accident. That is why it is important for family members to keep an eye on the driving abilities of older relatives.

How to Know When to Take Away the Keys

As an older person begins to experience these physical declines, it is important that he or she takes steps to accommodate for these weaknesses before it is too late. In Indiana, older drivers must renew their licenses more often than younger drivers so that their eyesight and cognitive abilities can be checked. In Indiana, drivers over the age of 75 are subject to the following renewal restrictions:

If a driver fails to pass a vision screening when attempting to renew his license, he will not be issued a renewal. However, the state’s restrictions may not be enough to keep unsafe older drivers off the road. If you see that a loved one is struggling with hearing loss, joint pain, memory problems, alertness, or is on multiple medications, ask him to take you for a ride. If you see that he is making dangerous driving errors, it is probably time to take away his car.

What If You Are in a Crash With an Older Driver?

While there are many stereotypes surrounding older drivers and the likelihood of them causing crashes, if you are in an accident with an older driver that was not your fault, steps will have to be taken to prove the other driver’s negligence. A driver’s age is not automatic proof of fault. If you are having difficulty getting the insurance settlement you deserve, call our car accident lawyers for assistance. We can help you gather the evidence you need to support your claim. Call 1-800-253-5537 to reach our Indianapolis office and speak with our injury attorneys.