Who is liable for a passenger’s injuries in a car accident?

You may have heard the front passenger seat in a car referred to as the “Death Seat.” This is because it is believed that the occupant of that seat suffers a higher rate of injury and death in collisions than occupants of other seats. In reality, both front seat and back seat passengers are injured and killed at a higher rate than drivers. This could be due to the fact that the driver will instinctively take evasive action to protect themselves in a collision, or perhaps passengers are less likely to wear a seatbelt than the driver. In any case, if you are a passenger in a car when it is involved in a crash, you need to know who is responsible for compensating you for your losses.

Start With Your Driver’s Insurance

For the purposes of this article, we are talking about accidents that occur when you are riding with someone who is not a family member. If you are in a crash when your spouse is driving, your claim will be the same as the driver’s claim. However, if you are not related to the driver and are not on the car’s insurance policy, you will have to take some additional steps to get 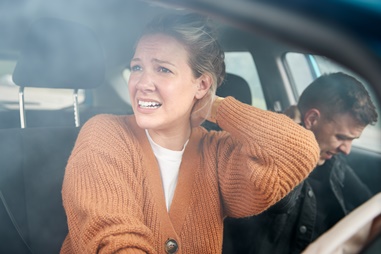 The first question to ask is whether the driver has Indiana med-pay coverage on their car insurance policy. This coverage is not required in Indiana, but many drivers have it to supplement their coverage. If the driver has med-pay, you would file a claim on that first. If they did not opt for med-pay or their med-pay policy limits are not enough to cover your expenses, you will file a claim on their bodily injury coverage. All Indiana drivers are required to carry a minimum of $25,000 per person and $50,000 per accident to cover injuries, but many drivers will have higher coverage limits. This coverage applies to the driver and anyone else injured in a crash—in their own or other vehicles.

Who Caused the Crash?

Unless it was a single-vehicle crash (i.e., into a telephone pole or a ditch), a key question to answer is who is responsible for causing the crash? If it was the driver of the vehicle you were in, you could be fighting for compensation with occupants of another vehicle. If the driver is carrying minimum Indiana insurance, that’s not a lot of money to go around. If you were seriously injured and have extensive medical bills, you can also file a claim with your own auto insurance or use your own health insurance to cover your medical care.

However, if the crash was caused by the driver of another car, both you and your driver can file claims with that driver’s liability insurance. If your injuries are severe enough to require hospitalization, you should call an Indiana personal injury attorney at this point. A lawyer can make sure the insurance company for the at-fault driver takes your claim seriously and agrees to fully compensate you for your losses.

Steps to Take After an Indiana Car Crash

Car accidents are traumatic, and it can be hard to have the presence of mind to think about protecting yourself at the scene of the crash. While the drivers will be the focus of police questioning and could be issued traffic tickets at the scene, you should take a few steps to protect your chance at a fair recovery of damages, including:

You Can Trust Keller & Keller With Your Passenger Injury Claim

If you are seriously injured in a car crash as a passenger, it’s important that you look out for yourself. Our knowledgeable team knows what your injuries are worth and who is liable for compensating you. Contact Keller & Keller in Indianapolis or Granger for help as soon as possible after the crash.