Who is liable for injuries and deaths caused by a car fire? 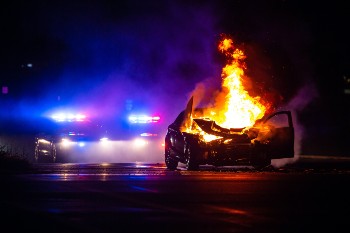 Cars should not catch on fire. That is a simple fact. If you were injured in a car fire, it is likely that another person’s or manufacturer’s negligence caused the fire. If this is the case, you can hold the at-fault party liable for everything you lost in the fire, but you will need the help of an experienced car accident lawyer. The personal injury lawyers at Keller & Keller in New Mexico are available to investigate the fire, identify the responsible parties, and hold them accountable. Call us to schedule an absolutely free review of your case to find out if we can help you after a devastating car fire.

Fortunately, car fires are not a common occurrence, even in a collision. Modern cars are designed to contain fuel so that it does not catch on fire in a crash—at least, they should be designed and manufactured that way. According to the National Fire Protection Association, there were nearly 175,000 highway vehicle fires reported in 2020 alone. The most common sources of vehicle fires are:

While these are the systems that typically catch on fire in a vehicle, there are multiple ways the systems could be compromised to cause a fire.

Who Might Be to Blame in an Albuquerque Car Fire?

If someone’s negligence contributed to the crash or malfunction that caused the fire, they could be made to pay for your losses. Depending on the cause of the fire, various parties could be to blame, including the following:

An accident investigator can be employed to determine whose actions led to the vehicle fire.

Potential Injuries in a Vehicle Fire

Victims of car fires can suffer catastrophic injuries that will impact them for the rest of their lives. Not only could they sustain injuries such as traumatic brain injury, spinal cord damage, broken bones, and whiplash in the collision, but a fire could cause:

The cost of recovering from car fire injuries can be astronomical. In addition to immediate medical treatment, the victim might need ongoing therapy, multiple surgeries, and many weeks off work. A settlement with the liable party or parties could ensure that these costs are covered.