Are Indiana’s highways safer because the speed limit for semi-trucks is lower than for cars? 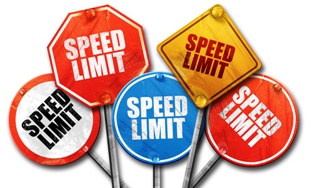 That’s a good question! Certainly, the motivation behind the lower speed limit for trucks is safety. Indiana and the six other states—California, Idaho, Michigan, Montana, Oregon, and Washington—that currently have a speed limit of at least 5 miles per hour less for semi-trucks believe that slower trucks result in safer highways. However, there are concerns about the logic behind this belief. We take a look at the question here.

It Is a Fact That Speed Kills

After the repeal of the national maximum speed limit in 1995, states were free to set their own speed limits. At the time, several states took the opportunity to raise the limit for cars but not for trucks. The thinking was that trucks are more dangerous at higher speeds because they are more difficult to maneuver and need more distance to stop. As speed limits for cars continue to increase—going as high as 80 or 85 mph in some areas—supporters of truck speed limits believe that trucks should never be allowed to travel at those speeds. While it is true that speed plays a part in a large number of highway crashes, there is concern that the difference in speed between cars and semi-trucks poses more problems than it solves.

How the Speed Differential Creates Problems

Proponents of a uniform speed limit for cars and trucks argue that it is the difference in the speed of travel that creates dangerous conditions, not the speed of the truck. For example, if trucks are driving at lower speeds, cars wishing to drive the speed limit will need to pass every time they approach a truck. Because drivers often pass carelessly, this creates a hazard that would not exist if the two vehicles were traveling at the same speed. Another argument in support of a higher speed limit for trucks is that it would reduce the number of hours a trucker must drive to get to his destination, thus decreasing the risk of driver fatigue and, ultimately, decreasing the number of trucks on the road.

Whatever the Cause, We Are Here for You

Whether Indiana ever votes to repeal the differential speed limit or not, truck drivers will continue to be responsible for their own actions when they cause a highway collision. If a truck driver is exceeding the 65 mph limit and causes a crash, he should be held liable. If the speed limit for trucks is increased and a trucker fails to stop in time to avoid an accident or loses control of his truck due to speed, he is also liable for the damage he causes. If you were in a crash with a commercial semi-truck in Indiana that was not your fault, contact Keller & Keller at one of our Indiana offices. We protect the rights of truck accident victims in Indiana.