Did A Crushed Roof Cause Your Injuries? You May Have A Lawsuit!

Each year in the United States, our Indianapolis car accident lawyer explains, thousands of people are killed or sustain traumatic injuries in rollover accidents, and the vast majority involve SUVs, semi-trucks, and vans. Why is this? Faulty design.

The primary cause of most single-vehicle rollovers is attributed to the vehicle’s width in relation to a higher center of gravity, leaving them top-heavy. When speed, steering, and road configuration are factored in, the risk of a rollover and/or roof crush increases.

Action movies that feature a car crash rollover often show the hero walking away from the accident. This rarely happens in real life. In fact, while rollovers account for less than 5% of the total accident types on our roads, they still account for more than 30% of automobile-related fatalities.

A crushed roof caused by a rollover can occur on any vehicle, however, it’s typically the automobiles with taller frames that are more likely to result in a roof crush lawsuit. 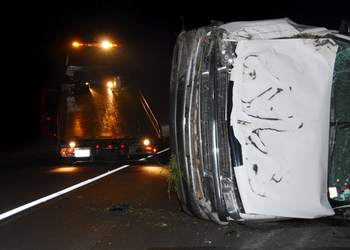 Any vehicle has the potential to rollover, however, automobiles that possess a higher than the normal center of gravity are most prone to rolling, especially if one of the following occurs:

Jerking the steering wheel or overcorrecting

We've witnessed a number of clients roll their vehicles after making a sudden evasive move (steering wheel jerk) to avoid an animal, object, or person on the road. Additionally, a number of rollovers occur after the driver leaves the road and jerks the wheel in an attempt to bring the vehicle back onto the road, inadvertently overcorrecting and causing a rollover.

Rain, snow, and ice are common culprits attributed to serious rollover accidents, especially when the vehicle is traveling at speeds too fast for the conditions.

The violent nature of a rollover is what makes it one of the most serious of accident types, and because of the potential for the roof to crush, the injuries often associated with it include:

A seatbelt obviously has the potential to reduce the severity of a person's injuries in a rollover accident, especially by preventing them from being thrown from the vehicle, however, when the vehicle's roof is crushed, even a seatbelt has its limitations. The two biggest concerns with a severe rollover case are paralysis and/or death, both caused by the roof frame's inability to hold the weight of the overturned vehicle.

Because the injuries a person receives in a rollover accident are so severe, it's not uncommon for the medical bills to reach hundreds of thousands of dollars. In other instances, the victim may require lifetime assistance. Add to this the fact that the insurance company will undoubtedly try to place some, most, or all fault with you, and it can lead to an aggravating situation.

Roof crush lawsuits are one of the most expensive and complex cases a person can attempt to pursue. Why? Because you'll be suing a car manufacturer and they have billions of dollars on their side.

You'll need an experienced and powerful car accident lawyer that can secure evidence, perform extensive investigations, and stand up to a big corporation. Our legal network has the ability to do all of these things on behalf of our clients.

Additionally, we offer clients who were injured in a roof crush accident a Zero Fee Guarantee. This means that you'll never be charged a consultation fee and the only way we receive money for our legal representation is if you receive compensation.