Orange barrels are a common sight around Indiana as our roads seem to be under constant construction. Highways, interstates, and rural roads—especially downtown Indianapolis, I-465, I-65, and I-69—are under construction nearly year-round. This should give Hoosier drivers all the incentive 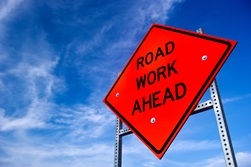 they need to take additional precautions in construction zones, ensuring they don't cause harm to themselves, another driver, or most importantly, vulnerable highway workers.

Our Indianapolis office has handled multiple highway construction worker accident cases with our clients' injuries ranging from life-altering to fatal. In almost every instance, our client was found to have absolutely no fault. Disturbingly, our Indianapolis auto accident attorney explains, in all of these cases, the driver of the vehicle that caused the accident could have avoided injuring or killing the worker if he had simply avoided these four common highway work zone driver mistakes.

Speeding in an Indianapolis Construction Zone

Not only is speeding in a work zone irresponsible, it can also be very costly, even if no one is hurt. Indiana fines motorists up to several times the amount of a normal traffic infraction if they are caught speeding in a construction zone. Local and state police will offer no leniency if they catch you speeding in a highway or interstate construction zone, and for good reason. Indiana law states the following:

Impatient, aggressive, or distracted drivers who disregard posted construction signs, traffic directors, or signals are yet another serious threat to themselves and the roadway construction worker. An area of the highway or interstate that is under construction will have a number of signs and signals for motorists. Many of the posted construction signs serve as warnings or directions to drivers advising of upcoming road conditions. These temporary signs should be treated with the same respect as any other of Indiana's highway laws or mandates.

The OVERWHELMING purpose of any sign in a highway construction zone is to keep everyone, especially the workers themselves, safe.

Inattentive driving, daydreaming, or looking away for a second can have deadly consequences. The nature of highway work is often laborious, slow moving, and meticulous. There's no shortage of large, slow-moving construction trucks, pavers, and various other machinery that will be working on the edges of the roadway, sometimes directly in front of you. The fact that many construction vehicles will have bad blind-spots (making it very difficult for them to see you) as well as an inability to easily stop or maneuver, makes it critical that you give your full attention to the road so as not to create an emergency situation.

Another common sight in a highway construction zone is one or more workers doing a repair on the shoulder of the roadway or in close proximity to passing traffic. Obviously, this is extremely risky and leaves the worker highly vulnerable to serious injury or death should a car drift or cross a divider for even a quick second.

Late lane merging or high-speed lane merging is another common factor in highway construction zone accidents. The width of lanes and the number of lanes available to vehicles are often reduced from their normal size. When a driver waits to merge until the last moment, or at a high rate of speed, side impact collisions or deadly rear-end collisions are not an uncommon result. Cars and trucks that have already merged or are stopped are also highly vulnerable to a vehicle that is trying to merge at high speeds, as there is often not enough stopping space available to the merging vehicle.

One of the most dangerous areas in a highway construction zone is near the start of the zone where the traffic pattern is first disrupted. Often people are caught off guard and enter the area at speeds that are much too fast for safe merging. Be HIGHLY aware of your surroundings when approaching the start of a construction zone.

If you are an Indiana highway worker or driver who was injured in a construction work zone due to another driver's negligence, it's possible you may be able to collect for damages. In most instances, we will be able to recover for medical bills, lost wages, and pain and suffering.