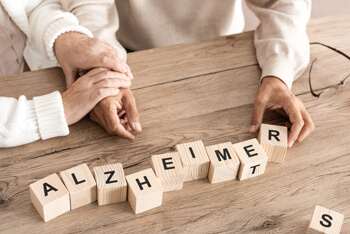 Alzheimer’s disease usually strikes when a person is around retirement age, so someone seeking disability with this diagnosis is likely to be someone with “early onset” Alzheimer’s disease. These cases account for 5-10% of all Alzheimer’s cases. The effects can be devastating and cause cognitive impairment resulting in job loss, leaving a worker without income. Someone in this situation should understand Social Security’s rules so they can make the life decisions necessary for adjustment to this incurable disease and the resulting inability to work.

Can You Get Social Security for Alzheimer's?

Social Security’s operations manual identifies Early-Onset Alzheimer’s disease as a Compassionate Allowance situation, meaning processing of the claim should be considered urgent so that reviewers can quickly confirm that this disease is causing disabling progressive dementia and get the individual on benefits as soon as possible.

This sounds pretty straightforward. The problem is that issues with diagnosis and documentation can hinder and delay Social Security’s evaluation process. Alzheimer’s can worsen slowly, meaning a sufferer may not immediately notice decline and may not seek medical treatment or evaluation until the symptoms have progressed to the point that the person can no longer work. In a case involving more rapid onset, someone may not be able to see a doctor until symptoms have significantly advanced. Either way, it’s fairly likely that someone with dementia symptoms may not get in to see the neurologist for an evaluation until they have reached the point of being unable to work. This wouldn’t be too problematic if the neurologist could simply run a test and make an Alzheimer’s diagnosis at that time. But it’s not so easy.

Medical Evidence of Alzheimer's Will Help You Get Disability Benefits

Before a neurologist can make an Alzheimer’s diagnosis, the doctor needs to rule out other potential causes of the dementia symptoms. This isn’t a delay caused by some kind of unnecessary “red tape;” the doctor wouldn’t be doing his job if he didn’t investigate other causes, as they may be much more conducive to treatment than Alzheimer’s. Putting an Alzheimer’s diagnosis in the medical record would tell other doctors that these other causes had been ruled out, and if this happened a patient might never get the tests which would indicate readily treatable causes of the symptoms.

In short, someone with disabling Alzheimer’s disease may not yet have the diagnosis for their case to be treated as a Compassionate Allowance. But someone in this situation can still be approved for disability. Lawyers can help craft arguments to convince Social Security to allow a claim. Alzheimer’s symptoms may be described in medical records as something like a “major neurocognitive disorder,” which would be considered a medically determinable impairment to be evaluated by Social Security. While it wouldn’t be an automatic approval, attorneys can present the judges with test results, medical opinions, and fact testimony to show them why the neurocognitive disorder is disabling.

A competent Social Security attorney should understand the evidence a judge will need to see before feeling comfortable approving a claim and tailor presentation of the case towards providing the judge with this evidence. For example, people often assume that merely showing an inability to perform their past work should qualify them for disability. Someone with a highly-paid, highly-skilled job may want to emphasize how cognitive decline made them unable to continue. However, a judge needs to determine that someone can’t do any job whatsoever before approving a disability case. While the inability to past work may be clear, the Social Security attorney can coordinate presentation of additional medical documentation that can show a judge why a person isn’t capable of any full-time employment.

Nonetheless, it’s possible that someone with an excellent job may experience early memory and concentration problems that make them unable to continue working their job, yet anxious about whether one of Social Security’s busy adjudicators will find them incapable of all work so their Social Security claim can be approved. Private Long Term Disability (LTD) insurance can be beneficial in this situation. Generally the payments are made shortly after an individual becomes unable to work (as opposed to Social Security’s lengthy process) and can be payable to a former high-earner who becomes unable to continue even if the person would be capable of a simpler, lower-paying job. These LTD policies are often available through an employer but should be purchased before someone becomes unable to work. Keller & Keller also handles LTD cases, which involve disputes over these private disability insurance policies.

Whether LTD or Social Security is at issue, proof problems may arise if different doctors have made different medical findings. For example, a patient may have one doctor suggest Alzheimer’s, while another believes that the cognitive deficiencies stem from something called “pseudodementia.” If you see this diagnosis in your medical records, don’t worry. No one is accusing you of malingering or faking anything. This diagnosis can be made when symptoms of a mental health disorder (like depression, anxiety, or PTSD) mimic the symptoms of an organic dementia. A good attorney will make sure the judge understands this. In my experience, judges are often suspicious and see “pseudo” as a red flag. (I’ve also noticed judges do this with “pseudoseizures” which are episodes like an epileptic seizure caused by emotional distress. Likewise, they are not made up or fake.) Depression, anxiety, and PTSD can cause significantly compromised memory, focus, and ability to recall words. These disorders can certainly interfere with the attention and concentration necessary to work. But this isn’t something objectively observable like a compressed nerve or a blocked artery, and proving this to a judge may require a sophisticated, informed presentation, not to mention evidence like treatment notes and medical opinions. An experienced attorney can put these elements together and help a just understand why “pseudodementia” is real and can be disabling.

The most important takeaway here is that anyone who has experienced job loss due to cognitive decline (or is worried about this happening) should consult with professionals. The doctor can consider your symptoms, run tests, and may be able to provide effective treatments. If not, the medical records can serve as evidence showing how the impairments will continue to prevent work. An attorney can advise you about your income replacement options and whether your impairments would put you in a position to qualify for them. You are welcome to contact Keller & Keller for this type of consultation.