Can You Get Social Security Benefits for Knee Pain or Knee Replacement? 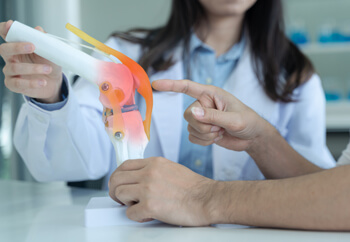 The number one symptom which prevents a person from working is obviously pain. In Disability claims, the most common condition causing this pain is back pain. Still, when a person reaches middle age and they do physical work, your back is not the only thing that hurts when you get home in the evening!

I once represented an engineer for a major drug company. We will call him Eugene (not his real name). His job was to manage the manufacturing in one of the company’s plants. As you might expect, a person like my client had spent a significant time in school. He understand chemical reactions and how to maintain the quality in their manufacturing process. BUT, his knees hurt him every day since he suffered a knee injury in his forties.

Like a person with good insurance, he went through the entire treatment regimen for knee pain. He went through conservative treatment; physical therapy, some pain killers, and even gel injections (a relatively new treatment where a gel is injected into the knee to hopefully lubricate the movement of the joint). Eventually, he allowed his doctor to perform a “scope” surgery, which is a surgery where the doctor doesn’t “open the knee,” but inserts a tiny camera and some instruments to remove irritated tissue (technology, am I right?).

Still, the knee pain persisted, especially after spending his time standing on the concrete floors at the factory, even with the brace he wore. Finally, at the advice of his doctor, Eugene consented to a knee replacement. As the Mayo Clinic explains "The procedure involves cutting away damaged bone and cartilage from your thighbone, shinbone, and kneecap and replacing it with an artificial joint (prosthesis) made of metal alloys, high-grade plastics, and polymers.

This extensive and complicated surgery is associated with several rough months of recovery, but soon Eugene was back to work.

It seemed to him like a medical miracle. But in the weeks afterward, the pain returned, although it wasn’t in THAT knee. It was in his leg and, rather than stabbing pain, it was a weakness and an instability. His job required him to climb ladders and, occasionally bend low or slide under machines. And, it was still work on concrete floors. When he exhausted his FMLA time and paid time off, he took short term disability. And, he called Keller and Keller, which turned out to be a good idea.

Eugene's case had everything a disability case requires:

Additionally, he was over 50 years old, which makes a disability claim easier to win (although, Keller & Keller attorneys have and will win cases of people like this who younger than 50).

Our attorneys attended Eugene's hearing, where an ALJ for Social Security initially denied his claim, because he was so educated “he could get other jobs.” Eugene (and that judge) discovered that when you hire Keller & Keller, you do not get to brush us off slightly. We took Social Security to Court and won. And, when we went back to a second hearing, the new ALJ noted Eugene’s long work history, his previous salary, his medical care, and his honest testimony and determined he was disabled.

What does that story mean for you and your knee pain? Well, it means you need consistent care. You need an MRI of that knee. And, you need the Social Security disability attorneys of Keller & Keller. It costs nothing to hire us; our Zero-Fee Guarantee means that you don't pay anything until we win your claim for benefits. Complete the form on this page today to schedule your free consultation with our team of Social Security lawyers.