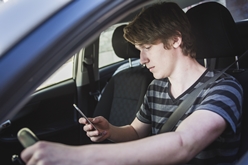 Many people agree that using a cell phone while driving is dangerous, but it is also illegal, at least for some Indiana drivers. Under a law that has been in effect since 2009 for those under 18 and 2015 for those under 21, drivers with a probationary license are prohibited from using a mobile device while driving in Indiana. That includes talking, texting, and hands-free use. Violators will be subject to fines of up to $500. Texting while driving is illegal for all drivers in Indiana. Our Indianapolis auto accident lawyer details more.

Distraction is a Major Problem for Indiana Teen Drivers

The cell phone restriction is intended to reduce the number of distracted driving accidents involving teenagers. According to the National Highway Traffic Safety Administration, 322 people were killed in car wrecks nationwide involving distracted teen drivers in 2015. Ten percent of teen drivers involved in fatal accidents that year were distracted at the time of the crash.

Researchers have compared the effect of cell phone distraction to that of mood-altering drugs, such as alcohol. Looking at the keypad or screen of a mobile device diverts the attention of a driver from the roadway.

Furthermore, studies have shown that the effect of talking on a cell phone, even while using a hands-free device, can impair reaction time. This is a condition referred to as "inattention blindness." Simply put, a driver who is concentrating on a conversation, as opposed to the roadway, might fail to see otherwise obvious traffic hazards.

While cell phone use is the most common form of teen distraction, Distraction.gov also cites the following distracted behaviors:

While there is no way to control all teen behaviors behind the wheel, Indiana has taken a step in the right direction by banning the use of hand-held and hands-free mobile devices.

Distracted Drivers Should be Held Accountable

Drivers of every age have the responsibility to operate their vehicles in a safe fashion. That means paying full attention at all times. Those who have been injured due to the negligence of another driver deserve qualified legal representation. Victims of a distracted driver or other at-fault parties might be entitled to reimbursement of legal expenses, lost wages in case of missed work, and even compensation for past and present pain and suffering.