The Risks Associated With Riding ATVs in Indiana 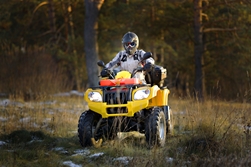 Often called four-wheelers, all-terrain vehicles (ATVs) are popular in Indiana as a way to cross open land, as transportation for teens who do not yet have a license, and just for fun and sport. Unfortunately, they are also often driven recklessly and cause serious and fatal accidents, often involving children. When you are injured in an auto accident, there may be multiple parties liable for your injuries. Understanding the causes of ATV accidents and taking care to always be a safe rider can prevent a tragedy, our Indianapolis personal injury attorney explains.

In general, ATV accidents are caused by the inexperience or carelessness of the driver. However, certain circumstances often lead to a greater risk of an accident, including the following:

According to the Consumer Product Safety Commission (CPSC), there are nearly 100,000 ATV-related, emergency-department-treated injuries and close to 700 ATV-related deaths in the U.S. every year. These vehicles pose a real risk to riders and those around them.

As ATVs are generally ridden off-road, they are not subject to the same traffic laws as other motor vehicles. In Indiana, riders aged 14 and older may ride without supervision but must have a valid Indiana driver’s license to ride on a paved road. Many counties in Indiana do permit ATVs on paved roads, despite the danger. Children under 14 may only ride an ATV if supervised by someone over the age of 18 or while on property owned or controlled by their parent or guardian. There are no helmet laws for ATVs in Indiana.

ATV crash victims are more likely to be killed if they are not wearing a helmet and other protective gear. The CPSC reports that the following types of ATV-related injuries are most commonly treated in the ER:

Who Is Liable for Injury Crashes?

Determining liability for ATV-related injuries can be complicated. As ATVs are not permitted on most public property in Indiana without a permit, private property owners may be held liable for injuries and deaths that occur on their property. When a child under adult supervision is injured, that adult may be held partially liable. An adult carrying a child as a passenger may be held accountable for injuries sustained by that child in a crash. Also, an ATV manufacturer may be held liable if a malfunction or lack of safety labeling led to a crash. If you or your child is injured in an Indiana ATV crash, contact the injury attorneys at Keller & Keller to discuss your options for seeking compensation.

Claim a Free Consultation With Our Indiana Personal Injury Lawyer