Should Students Buckle up on School Buses? The Debate Goes On 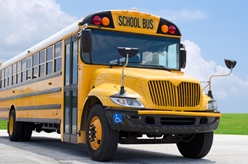 Every weekday in the United States, approximately 480,000 buses transport 25 million children to school. Over the course of the school year, these buses travel about 12,000 miles over all different types of urban and rural terrain. Putting their most precious cargo onboard, it’s natural for parents to be concerned about school bus safety.

While bus transportation has long been regarded as the safest way for children to get to school—only one percent of all student deaths during normal school travel hours are attributed to school bus accidents—recent accidents have brought the issue back to the forefront. Though rare, our Indianapolis auto accident attorney explains, bus crashes do still happen, and some parents, educators, and safety experts feel further safety measures should be taken to protect students on the road.

Compartmentalization Is the Current Key to School Bus Safety

Currently, most school buses rely on compartmentalization as their strongest safety feature. This theory is often compared to eggs in a carton, with children riding to between two high, energy-absorbing seats. If a crash occurs, students will stay in their own small space and hit the seats rather than other children or other parts of the bus. Compartmentalization is believed to reduce the risk of serious injury and keep children safe. Opponents, however, name a few key failures of compartmentalization, including:

To address the failings of compartmentalization, many believe that seat belts should be required on all school buses. Children are required to ride in special car seats or with seat belts in other types of vehicles, so it does beg the question as to why a bus would be different. Currently, only six states require the use of seat belts on school buses, and Indiana is not one of them. Multiple proposed measures that would require seat belts on state buses have failed to pass in recent years.

The Case for Seat Belt Installation on School Buses

The debate has long been waged, however, as those on both sides offer valid reasons for and against seat belt use on school buses. Those in favor of requiring seat belts include the American Academy of Pediatrics and the National Safety Council among others. These proponents state that seat belts:

The head of the National Highway Traffic Safety Administration (NHTSA) has been quoted as saying that seat belts will save lives if installed on buses. Despite this, there is no official mandate from that agency or any other to require them currently.

The Case Against Seat Belt Use on School Buses

Some say that the installation of seat belts is unnecessary. Those opposed to mandatory seat belt installation cite the overall safety of the large and easily recognizable school buses and the low number of deadly bus accidents every year. In addition, they point out other considerations, including:

While there may not be agreement on this issue, all those who weigh in can agree that the safety of school children is paramount. If your child has been injured in a school bus action, you may be eligible to pursue a legal claim.