The 10 Disabilities that Receive Social Security Benefits Most Often 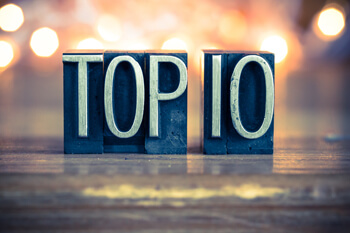 Social Security released a list of the 10 diagnostic groups that most frequently receive Social Security Disability Insurance (SSDI) benefits, with percentage-based data. When evaluating a case, Social Security will consider the limitations caused by all of someone’s severe impairments and compare that with the requirements of work to reach a decision on a claim. Sometimes, a client will ask me about having to “pick” one impairment on which to pursue disability, but this is unnecessary: all impairments should be considered. Nevertheless, Social Security will identify a “primary” disability for administrative purposes. A look at the “Top 10” list provides some insights:

No surprise here. If you had asked me before I looked at this list, I would have guessed that this group would account for over 50% of disability cases. I would still expect that more than half of disability claimants have been diagnosed with one of these impairments, even if it was not identified as the primary impairment.

This group seems to contain a wide range of disorders. Carpal tunnel, fibromyalgia, and degenerative disc disease (DDD) are frequently experienced together and can involve overlapping symptoms, but are distinctly different impairments. All would be considered under different categories of listings. DDD would be considered under new Listings 1.16 and/or 1.17 (which are ridiculously difficult to meet, but that’s a topic for another blog). Carpal tunnel syndrome is a compression neuropathy and a judge could evaluate whether it equals Listing 11.14 for peripheral neuropathy. There is no listing for fibromyalgia but a judge should evaluate whether it equals a listing; Social Security Ruling 12-2p implies that Listing 14.09D is the most appropriate to consider, and I agree.

Again, I can say with confidence that the prevalence of a mood disorder is much higher than the percentage of cases in which it is the primary impairment. I would also expect that over 50% of claimants have been diagnosed with a mood disorder, most often depression. Like most impairments, a mere diagnosis of depression does not automatically qualify someone for disability; Social Security will evaluate the severity of the impairment to make the disability determination.

We also see distinct disorders being grouped together here. The “nervous system” would include the impairments listed in Social Security’s 11.00 listings, which include stroke, but also include epilepsy, Parkinson’s disease, cerebral palsy, multiple sclerosis, ALS, myasthenia gravis, and peripheral neuropathy (among others). This group would also seem to encompass blindness and deafness.

With heart disease being the leading cause of death, one might expect that this group to account for a higher percentage of disability cases. This discrepancy may indicate that claims involving cardiovascular impairments are unfairly difficult to get approved and, indeed, this is what I have experienced. Judges minimize the effects of work-related stress on the cardiovascular system, how the symptoms of a heart problem would affect someone’s ability to work full-time, and the difficulty a long-time manual laborer would have in performing the technology use required of modern office work.

There is another reason this difficulty is fundamentally unfair to claimants – heart disease shortens life expectancy. Someone with heart disease is more likely to die young, meaning they would be expected to receive less lifetime value from Social Security payments. This would seem to indicate favorable disability standard, as opposed to the difficult one described above. This unfairness could also be considered with respect to the prevalence of heart disease amongst genders and races (but again, this is a topic for another blog).

While most impairments are more likely to become disabling later in life, someone with a schizophrenia spectrum disorder will usually experience onset at a relatively young age, generally under 30. Its percentage would likely be higher if not for various factors. This mental disorder can lead to behavior which would result in incarceration, which halts benefits and can create obstacles to getting approved in the first place. These individuals may also self-medicate with illegal substances, and judges are unfairly reluctant to approve cases involving a history of substance abuse. It’s understandable that judges don’t want a public perception that people get disability for a substance abuse problem, but their reluctance leads to unfair denials of claims in which substance use is incidental to an underlying mental disability.

“Intellectual disability” was formerly referred to mental retardation, and it seems that developmental disabilities would include autism spectrum disorders. Claims involving individuals suffering from these impairments will also generally be asserted by younger individuals, as they suffer from lifelong problems which make them unable to work. Don’t hesitate to help someone with one of these problems seek disability; it will only become more difficult for them to get it later in life. (A judge will wonder why they didn’t apply for it before.)

Injuries frequently make people unable to work, but the percentage here is low because of Social Security’s twelve-month durational requirement. Someone can only get Social Security Disability for impairments which make them unable to perform any occupation whatsoever for twelve months or longer. For this reason, consumers should consider private disability insurance programs, frequently available through employers, by which workers can obtain disability payments for injuries which make them unable to perform their own occupation, even if they would still be capable of performing a different occupation and/or if their injuries are not expected to last twelve years or longer. Keller & Keller also handles disputes of these private disability insurance claims.

8. Other Mental Disorders: 3.9% of SSDI Beneficiaries

Like depression, generalized anxiety disorder is very common and may be something which at least close to 50% of disability claimants have as a diagnosis. I very commonly speak with clients who are unable to function outside the home due to agoraphobia or cannot handle being around to others in the workplace because of social anxiety. However, as you can see, anxiety and personality disorders account for a relatively small percentage of disability recipients. This shows how difficult judges can be with this type of claim. For that reason, if you suffer from disabling anxiety, you need an attorney who knows what it takes to set your claim apart so it can be approved.

These “organic” mental disorders will be evaluated very similarly to anxiety and depression – a judge will consider how the disorder impacts someone’s ability to follow instructions, interact with others, maintain a work-like pace, and manage activities of daily living. However, as previously noted, these disorders can involve proof problems which make it always advisable to consult with a skilled disability attorney when seeking benefits for this kind of problem.

Diabetes mellitus (what people generally just call diabetes) is a terrible disease. The extent to which it causes disability is almost certainly under-estimated here, because diabetes causes dysfunction in other body systems (such as they eyes, kidneys, and nervous system) that are included with the other impairments described above. There is no listing for diabetes and, like cardiovascular disease, its sufferers sometimes face unfair obstacles in getting approved, compounded by the unfairness associated with a reduced lifetime value of Social Security benefits due to decreased life expectancy.

As you can see, as Social Security does the classifying and labeling associated with the disability adjudication process, fairness issues and proof problems arise. For this reason, you need a disability attorney who can show the judge that your case is more than a diagnosis listed in the medical records. It is an impairment that makes you unable to work, meaning disability is appropriate.